Ah, Christmas — it could be called “the season of TV” here in the UK. (Apparently Christmas Day telly is Not A Thing in most/all of the rest of the world. What do they do, actually interact with their family?! Madness.) Consequently, although it’s only two weeks since my last TV overview, my list of stuff watched that could go in this post included 26 different programmes. That’s all those one-off specials for you. From that long, long list, here are the ones I felt like writing about…

Doctor Who  Twice Upon a Time

Another year, another divisive Doctor Who Christmas special. It’s the third time that the Christmas Day spectacular has to serve double duty by writing out the programme’s lead actor, and it follows the format set out by David Tennant’s swan-song The End of Time and Matt Smith’s finale The Time of the Doctor by being a very inward-looking fan-focused edition. I’m not sure that’s the right tack to take on Christmas, quite frankly, when the show’s playing to a wider audience of more casual viewers than normal. Former showrunner Russell T Davies and immensely popular leading man Tennant had earnt that kind of indulgence by the time they exited, and the series was pretty much the biggest thing on British TV at the time, so most of those so-called “casual viewers” were actually regular watchers of the show anyway. I’m not convinced exiting showrunner Steven Moffat and departing Doctor Peter Capaldi are quite in the same position.

Oh, but what does it matter? Capaldi’s been brilliant, and is brilliant here again. It was great to see Pearl Mackie back as the wonderful Bill, even if her return felt like a massive fudge about. How you felt about Clara’s cameo really depends on your opinion of Clara (I wasn’t surprised she cropped up; I also wasn’t bothered). David Bradley was absolutely spectacular as a recreation of the First Doctor, originally played by William Hartnell, who Bradley managed to evoke without doing a flat impression or a disrespectful re-envisioning. I’d love him to pop up again in the future, but that would make this a bit less special. The actual plot was a bit of nothing, though it led to a lovely conclusion on the battlefields of World War One — oh, and how good was Mark Gatiss in an almost thankless little role as a WW1 soldier? His reaction to the news that there would be a World War Two was heartbreakingly understated.

And so, after Capaldi’s overwritten exit speech, we come to Jodie Whittaker’s debut as the Thirteenth Doctor. “Oh, brilliant,” was all she could say before she was kicked out of a crashing TARDIS — just as Tennant, Smith, and Capaldi all were immediately post-regeneration. We’ll have to wait until the autumn to get a proper handle on her interpretation of the role. Under the guidance of a new showrunner, Chris Chibnall, hopefully it’ll be worth the wait. 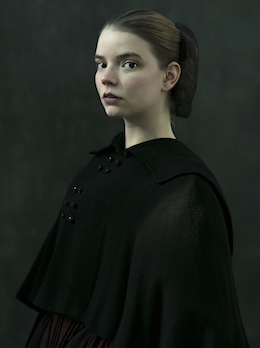 The BBC’s two-part adaptation of Jessie Burton’s 2014 bestseller promised to be a supernatural treat, though in that respect the trailers were somewhat misleading. Set in 17th century Amsterdam, it’s about a girl who marries a wealthy merchant, but finds his strict and secretive household is not all she’d hoped. He buys her a dolls house as a wedding gift and she commissions a miniaturist to produce items for it, but she soon starts to receive things she didn’t order — things which suggest the miniaturist somehow knows people’s secrets, and can possibly see the future… In actuality, The Miniaturist is more of a period drama, albeit one with lashings of Gothic that were right up my street. It was beautifully made, with a fantastic eye on the costumes and locations, and cinematography that evoked painting of the era. There were strong performances too, particularly from Anya Taylor-Joy (yes, her out of The VVitch and Split), once again brilliant as the initially delicate but increasingly confident lead, and Romola Garai as the merchant’s overbearing sister.

There were some striking revelations and twists along the way (even if we guessed a few of them), but where the narrative really struggled was as it moved towards its conclusion. Weirdly divided into ‘halves’ running 90 and 60 minutes respectively (did they accidentally make it half-an-hour too long, or half-an-hour too short?), the second episode felt like it was merely playing out the obvious repercussions from the first episode’s cliffhangers and reveals. The answers about the titular character were particularly underwhelming. Thematically, there was something there about being the master of your own destiny, but if that’s what they wanted to convey then I didn’t think it was played out as effectively as it should’ve been. A real mixed bag, then: I loved the overall style and many individual elements, but a disappointing second half failed to stick the landing.

A follow-up to last year’s magnificent Peter Pan Goes Wrong (see the “also watched” section), this sees the Cornley Polytechnic Drama Society attempt to redeem themselves by gatecrashing the BBC’s new production of A Christmas Carol. Cue a parade of slapstick, farce, puns, tomfoolery, and general merriment. Last year’s production was adapted from an already successful stage show, while this is a brand-new production, which perhaps explains why it doesn’t feel as meticulously fine-tuned as Peter Pan. It’s still funny (though, as the Twitter reaction proved, this style of comedy isn’t to everyone’s taste), but it didn’t surpass last year’s instant Christmas classic. 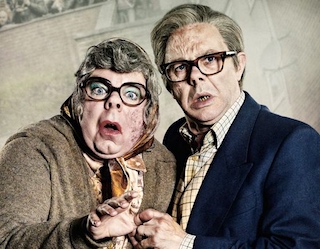 “Oh God, I’d forgotten,” says one character early in the first instalment for almost 15 years of BBC Two’s pitch-black comedy series. He’s been confronted with some other returning characters, but I have to say that the sentiment kind of sums up my reaction to a lot of this revival, in two ways: firstly because I had to keep rummaging in my memory to make connections back to a series I haven’t watched for a decade and a half, and secondly because the hilarious grotesquery of the League came crashing back. Revivals of once-great comedies can be a mistake — they’re often little more than an exercise in nostalgia; and this one is certainly aimed at fans, as the vast majority of it continues or riffs off stuff from before — but, in spite of that, it still felt fresh and edgy, not like a gang of middle-aged men reliving past glories (the other thing that goes wrong with revivals). So it was all really rather good, and it’s gone down very well too. Officially it’s a 20th anniversary special rather than a fourth series, but might we see more? I think it would be welcomed.

So much comedy, so much of it a passable time-killer that I have little else to say about. The highlight was probably 300 Years of French and Saunders, an excellent celebration of the comedy double act, reminding us of many of their greatest hits alongside a few nice additions. It made me want a whole highlights series repeating all their many hilarious film spoofs. Shakespearean satire Upstart Crow offered a neat riff on one of the better-remembered storylines from modern Christmas classic Love Actually, which it executed with surprising subtly (or, at least, I had to point out the references to my fellow viewers, which was followed by half-an-hour of scouring through Richard Curtis’ film for the relevant scenes). I enjoyed the pilot for Tim Vine Travels Through Time back in September, so was delighted to see a Christmas special in the schedules. It’s good clean silly fun. The same can’t quite be said of Mrs. Brown’s Boys. I only ever watch it at Christmas if I’m around other people who are, but I always laugh more than I feel I should. Other than that, I also chuckled (to one degree or another) through festive editions of Gogglebox, Have I Got News For You, Live at the Apollo, Michael McIntyre’s Big Show, QI, and Travel Man, plus the annual Big Fat Quiz of the Year, one-off Miranda Does Christmas, and a Romesh Ranganathan standup special. 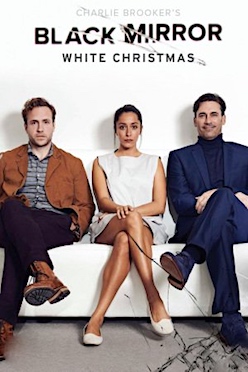 Black Mirror series four was released last Friday, but I haven’t even watched series three yet. Well, I did only watch series two just before series three came out, so I guess I’m catching up at a set speed. One of the obstacles (kind of) was this, the show’s only Christmas special — you can’t watch a Christmassy Christmas special any time other than Christmas, can you? Of course, I could’ve watched it last Christmas, but shh. Originally airing at Christmas 2014 (so I’m only three years behind), the feature-length edition introduces us to a couple of blokes isolated somewhere on Christmas Day telling each other a trio of technology-inspired tales that (surprise!) turn out to be connected after all. It nails Black Mirror’s best-known qualities: future technology that’s incredibly plausible due to being just slightly more advanced than our own, the way it considers how such marvellous innovations would actually be used and affect us as human beings, and particularly how it might go horribly, horribly wrong. Merry Christmas!

5 thoughts on “The Past Christmas on TV”