A slightly earlier than normal TV review this month, to get ahead of all the Christmas telly — but there’s still plenty to discuss…

The fourth live-action iteration of Frank Castle, Marvel’s murderous anti-hero (and people moan about Spider-Man reboots), debuted in Daredevil season two and was greeted so positively that now he’s got his own spin-off series. And “spin-off” is not an inaccurate descriptor, because this very much launches out of the events of Frank’s storyline in Daredevil — which makes it all the more annoying that Netflix care not for “previously on”s: Daredevil season two was over 18 months ago; a little refresher would be nice.

You see, the plot revisits the Punisher’s origins: his family were killed in the crossfire of a gang shoot-out, leading him to kill the criminals responsible. He thinks that mission is complete, but the season begins (more or less) with him discovering new intel that suggests his family’s murder may not have been so random, and it links back to his actions when he was in the military. This also serves as a launchpad for the series to tackle other war-related issues, primarily the psychological wellbeing of veterans. With such serious themes it’s perhaps no surprise that there’s very little here that’s outright comic-book-y here — no superpowers, for sure; not even veiled references to the big names of the MCU movies, which we’ve had in every other Marvel Netflix show. In fact, if it weren’t for the fact the series is so obviously spun out of Daredevil and has the Marvel logo at the start, you could be forgiven for thinking it wasn’t a Marvel show at all.

Some people think this removes the Punisher’s USP. In and of himself he’s just a violent man out for revenge — action cinema is stuffed to bursting with such anti-heroes. What makes Frank unique is he’s that kind of character but in a world where super-powered and super-moral people exist. So would The Punisher have been more interesting if, instead of a very grounded military conspiracy storyline, it had something to do with Frank clashing with superpowered people? I don’t know. It certainly would’ve been a different show. As it stands, this may be a show for people who don’t typically like Marvel shows. So was Jessica Jones before it, but this is for different people who don’t like Marvel shows — people like Jason Statham, maybe.

In the title role, Jon Bernthal is fantastic. You can absolutely believe him as a revenge-driven psychopath capable of killing anyone and everyone, but also as a kind-of-charming strong-but-silent type with a heart and moral code who will definitely do the right thing. I’ve seen some critics and viewers opine that now is the wrong time for a series about a hero who just murders indiscriminately. I say those people definitely haven’t watched this Punisher. Although the plot is a conspiracy thriller, the series invests a lot of time in the emotional world of Frank Castle, making him human and moral rather than just a single-minded murder-machine. Bernthal makes what could be a very one-note role into a plausible human being; one who you believe might be able to find redemption and leave someday. And maybe that makes him even more tragic — he could find it; it’s possible… but likely? There’s the rub. As it’s also trying to engage with issues facing combat veterans once they return home, it makes for a clearly different, more serious flavour for an MCU production. How successfully it explores these weighty issues is more debatable.

Many of these Marvel shows take their whole first season to fully complete the hero’s origin story, but The Punisher is stuck with the fact that Castle already became The Punisher during his Daredevil appearance. So do they just ignore that story shape? No, of course they don’t — they shift it on to the villain! Therefore any comic book fan who knows what one character will ultimately become (no spoilers here!) is constantly teased with possibilities throughout the season until, eventually, as we should’ve known from the start, the transformation occurs in the finale. Why not really surprise us: do the transformation earlier and then wrap a character up within one season, rather than leaving them dangling for a possible next time? Comic books have to leave things dangling — they will all run for ever and ever; there can be no permanent solutions — but these TV series will end — whether it’s after a single season, or two, or five, or ten, they are without exception finite. That means you’re allowed to wrap a character up and move on to others.

So, The Punisher is not an unmitigated success, but it does lend another flavour to the Marvel-Netflix landscape. I certainly hope we get to see more of Bernthal’s take on the character in the future. 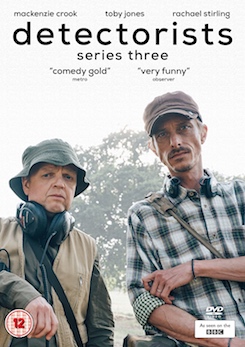 The third and final series of BBC Four’s sitcom about a couple of mates whose hobby is metal detecting was every bit the equal of the first two runs, which saw the show place on my list of 10 Favourite TV Series of the Last 10 Years back in February. Its brilliance lies in how perfectly weighted it is: the characters are quirky, but also normal; their problems are grounded and realistic, without being glum and unduly serious; it’s frequently hilarious, but without slipping into gurning ‘Comedy’ territory; it’s kind and gentle, but without being dull; and it’s all very lovely and kind-hearted, without being twee or saccharine. It’s also beautifully put together by writer-director (and star) Mackenzie Crook — the storyline across the series was precisely constructed, and the photography is often a gorgeous showcase for the English countryside. A real gem that will be missed, though at least it came to a perfect conclusion.

I only heard about this after its Big Twist was much-discussed online, so starting it was an exercise in knowing there was a big reveal awaiting. Fortunately, that knowledge doesn’t overshadow everything that comes before it. For those who still aren’t aware of it (especially as it’s only on Netflix on this side of the pond), it’s about a woman (Kristen Bell) who dies and goes to Heaven only due to an admin error, so she tries to better herself so that she’s deserving of her place. Other complications emerge as the season goes on, but that’s the premise. There’s a lot of plot for a sitcom — although it’s not necessarily immediately obvious, it tells a 13-episode story; this makes Netflix quite a natural home for it, actually, as it’s not your typical “every episode is fundamentally standalone” sitcom. But it’s also very funny in amongst all that, mining not only the characters and their foibles, but also the uncommon situation they’ve found themselves in. The shocker in the finale is just the icing on the cake. I hear season two has gone off the boil somewhat, but I’ll find out for myself once it’s all wrapped up.