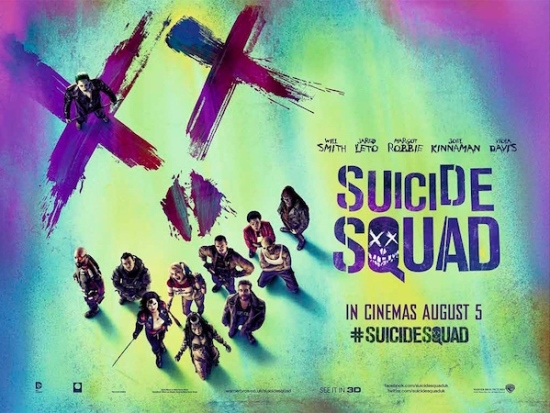 The third movie in DC’s attempt at a shared cinematic universe always seemed like an odd choice — why adapt a minor title starring second- or third- (or even fourth-) string villains when you’ve yet to bring several of your better-known heroes to the screen? Then the trailers came out and the apparent darkly comical tone seemed to click with viewers. But apparently that wasn’t what the movie was like at all, so then the studio ordered reshoots and hired the trailer editing people to re-cut the whole movie.

That did not end well.

The final version of Suicide Squad definitely feels like a film that was messed around in post. I imagine the basic plot remains the same, however: sneaky government operative Amanda Waller (Viola Davis) comes up with a Cunning Plan to use locked-up super-villains — including the likes of Deadshot (Will Smith) and Harley Quinn (Margot Robbie) — to undertake dangerous and/or secret missions, on the basis that these prisoners are totally expendable. Why would the villains agree? They don’t have a choice: little bombs in their head will go off if they don’t comply. Almost immediately after getting approval for her initiative, a crisis breaks out in Generic Skyscraper City that requires the Squad’s expertise — how handy! Meanwhile, the Joker (Jared Leto) is concocting a plan to free his girlfriend…

That there were editing tussles over Suicide Squad’s final cut becomes evident almost immediately: the way it introduces Deadshot and Harley before cutting to Waller pitching her plan is a little clunky, surely a re-ordering to get the big-name characters on screen ASAP, which becomes obvious when they’re later introduced again alongside the other candidates. However, it really goes awry when Waller’s pitch and introduction of the Enchantress is immediately followed by another meeting where Waller makes her pitch and introduces the Enchantress. Maybe the screenplay was that clunkingly constructed to begin with, or maybe they just made a ham-fisted job of the restructuring.

On a shot-to-shot level the editing is fine, but various events aren’t allowed the necessary room to breathe, the endless character introductions are a jumble, the narrative is fitfully revealed, and the overall pace is a disaster. It’s easy to believe that it was cut by trailer editors because the pace and style with which it handles some sequences is reminiscent of the storytelling economy applied in trailers. Problem is, what works in a 120-second advertisement doesn’t in a 120-minute narrative. There are bits that are well put together — the occasional strong scene or impressive visual idea — but there’s a nagging awareness that someone felt the need to mess things around.

Similarly, the use of songs on the soundtrack is scattershot. Some are eye-rollingly on the nose, while others seem chucked in at random, the apparent intent to be ‘quirky’ by throwing on discordant tracks. Parts of the film are the same, like Captain Boomerang’s pink unicorn: it’s a self-consciously Funny bit that’s deployed a couple of times early on and then completely disregarded. I mean, I’m not going to argue that the lack of reference to pink unicorns after the halfway point is Suicide Squad’s biggest flaw, but it’s indicative of its sloppy handling of material.

Examples of this disjointedness are almost endless. Like, during the climax the squad have a specific plan to deal with Enchantress’ brother, who they are aware of thanks to earlier seeing him on a ‘spy boomerang’ (don’t ask). But when the big fella comes out, their reactions are all “who the hell is this?!” and “we’re in trouble now!” It’s not a major flaw, it just doesn’t quite make sense — and when that keeps happening, I’d say the cumulative effect is a problem.

On the bright side, Margot Robbie and Will Smith work overtime to both make their characters function and bring some entertainment value to the film, and they largely succeed. Viola Davis makes for a great love-to-hate character as the endlessly cunning Waller. I don’t even dislike Jared Leto’s loony take on the Joker. The rest of the cast… well, okay, the less said about them the better. For one thing, there’s a lot of them, and some don’t even need to be there. Slipknot and Katana barely serve any function, for instance, and the film only emphasises this by giving them clumsily offhand introductions.

There’s a definite sense that this version of Suicide Squad was created based on either audience feedback or the perception of what the audience wants, rather than what was actually designed to be the structure of the movie. It hasn’t worked. Scenes butt against each other in ways that surely weren’t intended, and the longer it goes on the more it feels like bits and pieces have been dropped in or taken out all over the place. It is possible to restructure a film in post, especially when you have reshoots to smooth the joins, but Suicide Squad absolutely feels like the hash job it was reported to be. Its legacy will be the lesson of what happens when you attempt a last-minute chop-and-change re-cut.

So, is the extended cut better?

Well, firstly, this isn’t a Batman v Superman-esque situation, where the extended cut puts the film back together how it was originally meant to be and suddenly makes it work. This is exactly what it says on the tin: extended. It’s the same movie, with 13 extra minutes.

I did enjoy it more on second viewing, but I’m not sure that was because of the new material. There’s extra stuff with Harley and the Joker, which feels like it’s been shoehorned in — but then, so did their scenes that were there before. The bar scene was one of the highlights of the theatrical cut and is improved by adding back some material that was only in the trailer. Otherwise, I suspect it’s just the rewatch factor, under which circumstances familiarity can allow the brain to make connections or invent explanations that the film may not contain, but through their existence (even if it’s just in your head) the film makes more sense. Even that doesn’t absolve all of Suicide Squad’s numerous faults, but it’s something.

It’s still not a good movie, really, but at least second time round I (overall) enjoyed watching it.

And finally, lest you ever forget… 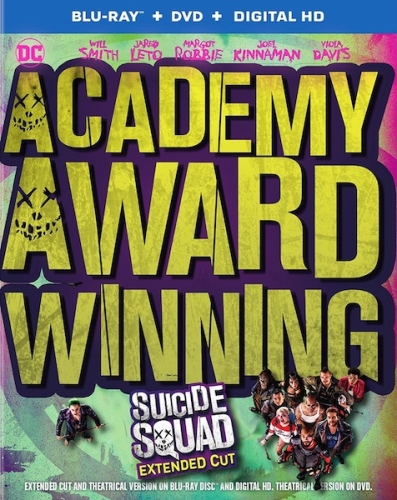