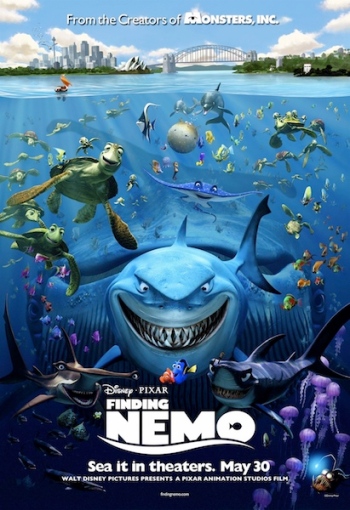 There are 3.7 trillion fish in the ocean.*
They’re looking for one.

The Story
When clownfish Nemo is netted by a diver, his nervous father swims across the ocean in search of his son. Meanwhile, Nemo tries to escape the fish tank he’s wound up in.

Our Heroes
Single dad Marlin just wants the best for his son, Nemo, but his worries make him overprotective. However, little Nemo is braver and more capable than he knows. It must run in the family, because Marlin steps up to go to the ends of the Earth to rescue his son, aided by the forgetful but kind-hearted Dory.

Our Villains
Not exactly villain in the traditional sense, but the dentist who bagged Nemo, and is intending to give him as a present to his overenthusiastic niece, did start all this trouble and is putting the eponymous fishy in harm’s way, so…

Best Supporting Character
As you might expect from what is in many respects an under-the-sea road movie, our heroes encounter an array of colourful characters on their journey. Perhaps the most memorable is turtle Crush, voiced by director Andrew Stanton, who’s characterised as a surfer dude. (According to The Disney Wiki, he’s also the films tetartagonist, which is a word I never knew I needed until now. Though, by the time you’re down to the level of the fourth protagonist, you’re getting into murky waters. I mean, when you consider the importance of Gill, maybe Crush is actually the pentagonist? Or the sentagonist? Or maybe we shouldn’t even be using these labels in the first place.)

Memorable Scene
Marlin and Dory meet a ‘friendly’ shark, Bruce, who coerces them into attending a meeting of his support group for sharks who are trying to reform from their fish-eating ways. “Fish are friends, not food”… until a shark smells blood, anyway.

Next time…
13 years later, the gang got back together for Finding Dory.

Finding Nemo is one of the films that helped establish Pixar’s name as a byword for quality animation. While it’s a very likeable movie, I must admit I’ve never loved it. Perhaps its popularity and impact has more to do with when it was released: Disney’s primary movies at the time were mired in the likes of Treasure Planet and Home on the Range, and DreamWorks’ only real achievement was the first Shrek. That said, I don’t want to do Nemo a disservice: it’s packed to the gills with engaging characters, memorable lines, funny ideas, colourful designs, and a couple of strong moral messages. It’s a true family movie.

* Actually, no one can ever know exactly how many fish there are in the ocean. According to some sources, the real number is probably closer to between 1 and 4 quadrillion! We just wanted to emphasize the boatload of fish that live in the world’s oceans and one fish’s incredible quest to find his lost son. If you think you know the actual number, we’d like to know too! Contact us at: findingnemo.com