Christmastime: it’s all about family, food, presents, sweets, more food, alcohol, a bit more food, some kid who was born a while ago, and also food. But most of all, it’s about TV. Oh dear Lord, so much TV.

Is it just me and my insanely broad and forgiving interests, or has there been more TV to watch this Christmas than normal? Every day in our copy of the Radio Times’ “legendary” Christmas issue seems alight with highlighter markings, an endless parade of visual entertainment to… well, to add to the list of stuff to watch later on catch-up, mainly. But I did actually watch some of it, and here is what I thought.

Doctor Who The Return of Doctor Mysterio

The controversial Steven Moffat era of nuWho is headed towards its end, but before his final full series next year there’s this penultimate Christmas special. There have been 12 of them now and they’re always divisive: some people think they’re too Christmassy, some that they’re not Christmassy enough; some like that they’re standalone adventures suited to a broader audience, but other times they’re not standalone enough… Each year presents a different mix of these elements, pleasing some and alienating others.

This year, Doctor Who taps into the zeitgeist by finally tackling superheroes, with a riff off classic-styled Superman. Personally, I thought it was the best Christmas episode for years — a fun, exciting, witty, entertaining romp, that captured the tone of the superhero genre but gave it Doctor Who’s typical gently-irreverent spin. The tone was perfectly suited to Christmas day.

The Great Christmas Bake Off

“Proper Bake Off” came to an end with what felt a little like a joyous celebration of the series’ unique charms, as well as its highs and lows. Considering the two festive episodes were shot before the controversial move to Channel 4 took place, that’s almost impressive. It’s hard to imagine GBBO without the alchemical mix of Mel, Sue, Paul and Mary, and these episodes showed the format on fine form. And then the BBC went and snuck in that perfectly-edited 60-second tribute to the whole thing. Who knew a programme about baking cake could be so good? Or make some people so emotional…

Bob Monkhouse: The Last Stand
A few months before his death in 2003, Bob Monkhouse gave a one-off gig to an invited audience of fellow comedians which has apparently gone down in comedy legend. I’d never heard of it before, but there you go (I had the same thing with the joke in The Aristocrats and its alleged notoriety, so I won’t say I’m surprised). This was the first time that gig has been televised in a full form, and I confess I’d paid it no heed until it was trending on Twitter. Thanks for that recommendation, Twittersphere, because it’s a very good show: Bob tells jokes, tells stories, and interviews Mike Yarwood in front of an admiring audience who aren’t aware it’s probably his last gig — but, with that hindsight, the themes of sharing a lifetime of wisdom and finding contentment are obvious.

The problem with Christmas specials of on-going shows is you’re sometimes left with on-going plots that must be acknowledged, and Grantchester has a particularly major one with its hero’s life-long love leaving her husband while pregnant. If you don’t watch, it’s set in the ’50s, so this kind of behaviour is the greatest scandal known to man. The special leaps into this without even the by-your-leave of a “previously on”, so I pity any non-regular viewers made to sit down in front of it on Christmas Eve. But it’s an immensely popular show with big ratings, apparently, so who can blame ITV for wanting it in their always-underpowered Christmas schedule? I imagine it fared better than Maigret did the next night…

The team behind previous Christmas specials The Gruffalo, Room on the Broom, and Stick Man returned this year with a two-part adaptation of Roald Dahl’s retold fairy tales. Dahl’s individual tales have been intelligently remixed into a pair of stories (one per part, of course), with a framing narrative that actually contains a neat cliffhanger twist at the end of part one. Maybe it just caught me unawares because I wasn’t expecting it, but I thought it was very effective. Anyway, Dahl’s witty rhyming couplets are retained, delivered by a well-chosen cast, not least Dominic West as a smooth, charming, suspicious Wolf. The claymation-ish visual style of the CG animation is familiar from the makers’ previous films, but as polished and well-applied as ever, with some beautiful details. It makes for a visual treat to equal the excellent words they have to work with.

The Witness for the Prosecution 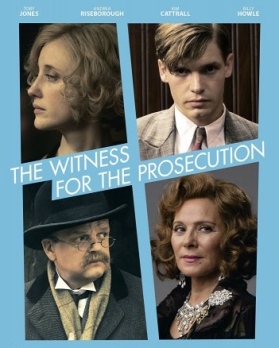 I thought And Then There Were None was one of the highlights of last year’s Christmas schedule, turning Agatha Christie’s most popular novel into a dark, slasher-movie-esque thriller, the first English-language adaptation to remain faithful to the original’s glum ending. I don’t know if this year’s Christie is faithful to her original short story, but it isn’t to the play adaptation (at least as I know it from the excellent film version). It seems to have deliberately followed in And Then There Were None’s tonal footsteps, shooting for a bleak tale about the fundamental darkness of human nature. Instead it’s diluted the satisfying mystery and removed the tension, with a two-hour running time feeling ponderous and its cinematography trying for atmospheric but instead hitting murky. Some people don’t approve of Christie-esque narratives that make a guessing game out of murder, but if you want you can always write your own gloomily realistic meditation on the nature of evil rather than co-opting her work into a grim treatise.

There’s always a lot of special episodes of comedy shows on over Christmas, with varying degrees of success. I thought this year’s Live at the Apollo was woeful, with Romesh Ranganathan the only truly bright spot in 45 minutes of flat observations and unfunny daftness. Conversely, Would I Lie To You? proved to be as good value as it always is, thanks to the quick wit of the regulars plus Tom Courtenay’s affected (I presume) dodderiness. Mock the Week’s clip show format was perhaps improved by the fact I didn’t watch the most recent series, while the imperfect Insert Name Here makes a nonetheless welcome return. In the comedy gameshow sub-genre, Alan Carr’s 12 Stars of Christmas was the kind of trash I’d never watch at any other time of year yet stuck with for all five hours and kind of enjoyed (helped by watching on catch-up and fast-forwarding the really repetitious bits), while the David Walliams-fronted Blankety Blank revival provided as much charm as the format ever has. And normally it wouldn’t count as comedy, but this year’s run of Celebrity Mastermind began with CBBC puppet Hacker T. Dog as a contestant. At least he didn’t win.

10 thoughts on “The Past Christmas on TV”