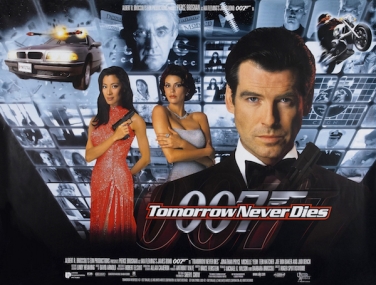 Yesterday is a memory. Today is history.
Tomorrow is in the hands of one man.
Bond. You know the rest.

Screenwriter
Bruce Feirstein (GoldenEye, The World Is Not Enough)

Based on
James Bond, a character created by Ian Fleming.

The Story
Secret agent James Bond is deployed to investigate a media baron who is plotting to ignite a war between the UK and China to further his business empire.

Our Hero
The name’s Bond, James Bond. In his second outing as agent 007, Pierce Brosnan has settled comfortably into his interpretation of the hero, a mix of Roger Moore’s eyebrow-raising levity with some of Sean Connery’s slightly harder, man-of-action edge.

Our Villain
Elliot Carver is a megalomaniac media mogul — the owner of the newspaper Tomorrow, who intends to secretly provoke a war in order to boost sales and ratings. James Bond does satire? Kinda.

Best Supporting Character
Wai Lin, a spy who’s investigating Carver for the Chinese. A skilled martial artist, she kicks all kinds of ass. Despite initial mistrust, she and Bond ultimately team up. Lin is arguably one of the first Bond girls who can genuinely claim to be a competent character in her own right. Still ends up sleeping with Bond, though.

Memorable Quote
Admiral Roebuck: “With all due respect, M, sometimes I don’t think you have the balls for this job.”
M: “Perhaps. But the advantage is I don’t have to think with them all the time.”

Memorable Scene
Remote control car, James Bond style: Bond lies in the backseat of his BMW, driving it around a multi-storey car park with his mobile phone, deploying its weapons against a gang of attackers. It was a fun concept back in ’97, but I imagine you could do it yourself with an app now. Apart from the weapons. And the legal implications. So maybe not.

Memorable Music
After the disastrous ‘modern’ score for GoldenEye, music duties were here handed to David Arnold. At the time he had composed the scores for Stargate and Independence Day, but, even more pertinently, he had produced Shaken and Stirred, an album of contemporary-styled covers of great Bond themes. The album was heard by iconic Bond composer John Barry, who then recommended Arnold to producer Barbara Broccoli. Arnold’s score is much more in-keeping with classic Bond music, but given a modern (well, ’90s) flavour. Backseat Driver, the soundtrack to my Memorable Scene pick, is a particularly great action cue. Arnold would become the series’ composer for the next four films, until Sam Mendes chose to use his regular collaborator Thomas Newman for Skyfall and Spectre. With Mendes moving on, perhaps Arnold will be back for Bond 25…

Write the Theme Tune…
Arnold wanted to have a hand in writing the title song and integrate it into his soundtrack, like the great Bond composers of old. To that end he wrote a theme sung by k.d. lang… which plays over the end credits and is titled Surrender, though has a tellingly prominent use of the phrase “tomorrow never dies” in its lyrics.

Sing the Theme Tune…
The producers went with a more marketable proposition for the final opening credits song, however, in the shape of Sheryl Crow, famous for her pop-rock-y hits like All I Wanna Do, A Change Would Do You Good, and Everyday is a Winding Road. In the pantheon of Bond title themes, her Tomorrow Never Dies sits firmly in the middle — it’s not a GoldenEye, but it’s not a Die Another Day either.

Making of
The film was originally called Tomorrow Never Lies, referencing Carver’s newspaper, Tomorrow. Some kind of production mix-up (a typo, a smudged fax — pick your story) led to it being misread as Tomorrow Never Dies, and the new, less meaningful title stuck.

This Category Sponsored By BMW
Apparently Tomorrow Never Dies was the first movie in history to have its entire budget covered by product placement endorsements — that’s over $100 million in advertising. Featured companies include BMW, L’Oréal, Heineken, Dunhill, Ericsson, Omega, Smirnoff, Brioni, Bollinger, and Avis, plus a tie-in game from Electronic Arts.

Previously on…
17 previous Bond films (which are all technically in the same continuity). The previous one, GoldenEye, was the first to star Pierce Brosnan and relaunched the series to mass popularity after a fallow period.

Next time…
Two more Brosnan Bonds, before he was unceremoniously dumped to reboot the series for the first time. With a 25th film now in the works, the series is set to continue indefinitely.

What the Critics Said
“East meets West, yin meets yang and chop-socky meets kiss-kiss bang-bang in Tomorrow Never Dies, a zippy 007 romp that draws as heavily from the Asian action genre as from the formula that has served the series so well for 35 years. Goldeneye and Pierce Brosnan’s debonair Bond resuscitated the creaky franchise in 1995, but […] Tomorrow, jazzier, wittier and more costly than its predecessor, also comes closer to catching up with ’90s style and politics. […] Hong Kong kung-pow chick Michelle Yeoh, as the cool-headed Chinese agent Wai Lin, proves 007’s equal at kicking post-Cold War butt. The two take on craven communications baron Elliot Carver (Jonathan Pryce), a deliciously exaggerated — or is it? — composite of Ted Turner, Rupert Murdoch and the late Robert Maxwell. Carver’s not only the most plausible Bond nemesis ever but the perfect one for the current global villain shortage.” — Rita Kempley, The Washington Post

What the Public Say
“TND is somewhat underrated. Jonathan Pryce plays a villain who is essentially Rupert Murdoch smooshed together with Ted Turner. His plan isn’t to take over the world so much as it is getting rich by starting a war and then covering it on his news outlets. This just may be the most plausible Bond villain scheme of all times – which admittedly isn’t saying much. […] TND may not be among the best Bonds, but it’s got more going for it than I think it gets credit for.” — Lebeau, Lebeau’s Le Blog

I know some of you will be thinking, “how can you leave out Goldfinger / Thunderball / The Spy Who Loved Me / For Your Eyes Only / The Living Daylights / Licence to Kill [delete according to personal preference] but include Tomorrow Never Dies?!” It’s true, TND is far from the most popular Bond film, but it was the first I saw on the big screen, and that gives me a certain soft spot for it. It’s not just that, though.

Here’s a thing: one of the criticisms levelled at the film is that it’s just an action movie, lacking the peculiarly Bondian thrills a Bond adventure should have. But if it is “just an action movie” then it’s the best action movie in the Bond series. The pre-titles gunfight at the arms meet, the ‘backseat driver’ sequence, and the motorbike-vs-helicopter chase are three of the finest action scenes in the entire franchise, and that’s without even touching on Michelle Yeoh kicking ass. Couple that with Brosnan still new and confident in the lead role, and Jonathan Pryce nibbling the scenery as a lightly satirical villain, and I think you have a Bond film that is pretty entertaining, even if it’s mainly on an adrenaline-pumping level.