Sometimes you just have to see what all the fuss is about, even if that fuss is overwhelmingly negative. Obviously that’s the case with the most recent attempt to bring Marvel’s popular “first family” to the big screen. The behind-the-scenes stories are already the stuff of movieland legend, so I won’t repeat them here, but what of the film itself? Or the version that ended up available for public consumption, anyway.

Reimagining the group’s origins, the film sees young genius scientist Reed Richards (Miles Teller) recruited to a research institute where he works with Sue Storm (Kate Mara), her adoptive brother Johnny (Michael B. Jordan), and the precocious and rebellious Victor Von Doom (Toby Kebbell) to develop a teleport to another world, Planet Zero. When the device is proven to work, the institute’s supervisor rules astronauts will get to take the maiden voyage. Annoyed, the scientists rope in Reed’s childhood friend Ben (Jamie Bell) to help them use it first. But things go horrendously awry, leaving the gang with new abilities…

That chunk of the story takes most of the first hour. Other than being a little slow getting to the point, considering most viewers know where it’s all going, and perhaps not building the characters’ relationships as thoroughly as it could have, I thought it was shaping up as a pretty decent film. It’s not a mind-blowing masterpiece, and it’s certainly not faithful to the original comic, but as a sci-fi movie? It’s good. Not incredible, but good. Well, aside from one truly terrible reshoot wig.

Then the story suddenly jumps forward a whole year, and things go to pot. From that point the film’s ideas aren’t bad, but it feels like the movie was ripped apart and put back together awkwardly, with parts missing, some out of order, and other bits added to cover gaps 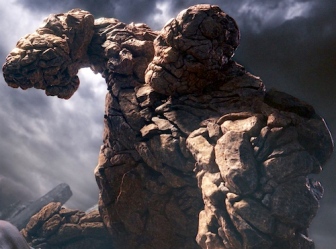 and serve as new pieces — like a shattered mug that’s been reassembled with lashings of superglue and using a handle from another vessel, which has inexplicably wound up a slightly different size and shape to how it used to be. Considering the studio got cold feet and insisted on massive reshoots, this is quite possibly exactly what happened.

It climaxes with a rushed action sequence on Planet Zero, which was clearly constructed entirely during reshoots (the constant presence of Reshoot Wig gives that away, if nothing else). The speed with which it’s dispatched makes it feel anticlimactic, despite the alleged world-destroying scale, and mainly leaves you wondering how the film originally ended. When it’s done, the heroes return to Earth and triumphant music swells… as they survey a scene of total devastation. It’s clear this hasn’t been thought through. There are still more signs of a rushed production: the CGI used to realise the Thing is pretty good for most of the film, but an unbearably cheesy final scene looks like a poorly-composited unfinished draft. Allowing such a rushed, underfunded, and heavily reshot final act to be released feels amateurish on Fox’s part.

While the studio are obviously keen to blame director Josh Trank for all the film’s problems, and possibly sink his career in the process, I can’t help but think it’s their own fault. It was they who chose to commission a “dark and serious” take on the Four, at odds with their usual depiction, but then wimp out and not follow through on the directorial vision they’d chosen. Despite what some fans would say, it’s this lack of commitment that’s the actual problem. Even in the face of the success of the lighter-toned Marvel Studios movie universe,

Fox like to keep their superhero movies Serious and Dark — and why not? Before this, it had worked pretty well for them across seven X-Men movies, while their colourful-and-cheery earlier attempts at bringing Marvel’s first family to the big screen met with unwavering derision and diminishing box office. It was not an illogical choice to try something different tonally.

In the end, however, this version crashed and burned even harder than those earlier films, both with fans and at the box office. Meanwhile, the latest X-Men movie was similarly ripped asunder by critics and has only performed acceptably; and concurrently, superhero comedy Deadpool took the world by storm. Perhaps this will create a sea-change in the way Fox approach their superhero properties? Only time will tell — though with Deadpool 2 set to offer more of the same and a Wolverine threequel following in its R-rated footsteps, while another X-Men movie is surely in development but not officially announced and the planned Fantastic Four sequels have been quietly cancelled, perhaps it already is.

Fantastic Four’s real problems are twofold: deviating so heavily from the original comic book, which meant from the outset that an awful lot of fanboys were always going to hate it; and then not having the confidence to see that vision through, titting about with things in post. The latter results in a mess of a second half where the whole thing unravels. It’s not perfect before that, but it’s a decent sci-fi movie. I’d love to see Trank’s original cut — I’m not sure it would be a great film, and I’m damn sure it still wouldn’t properly resemble the Fantastic Four of Marvel’s comics, but I bet it would be a lot more consistent than this, and consequently better.

What could have been a comfortable 3-star movie, maybe even 4 if it followed through well enough, is dragged down to 2 by studio meddling. Will they never learn? Nonetheless, I actually enjoyed enough of Fantastic Four that, while it won’t be going on the long-list of contenders for the best movies I’ve seen this year, I won’t be putting it on the list for the worst either.