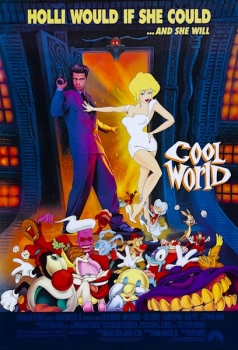 Sometime recently, I said I was making more of an effort to avoid watching movies I know are going to be bad — when there’s so much good stuff to see, why knowingly waste time on bad stuff? But then sometimes something just catches your attention and you have to see for yourself. It sounds as if no one had anything good to say about Cool World when it came out back in 1992, and no one’s had anything good to say about it since either, but after spotting it on Netflix (I’m not sure I’d even heard of it before that) my curiosity was piqued.

Directed by Ralph Bakshi, who’s probably best known for the animated Lord of the Rings, it’s the story of cartoonist Jack Deebs (Gabriel Byrne) who’s created the zany, surreal ‘Cool World’. But Cool World is actually a real place (a real cartoon place, as it were), which Jack ends up getting transported to. He meets femme fatale Holli Would (voiced by Kim Basinger) who wants to escape to the real world, but is being prevented from doing so by Frank (Brad Pitt), another real human who was transported to Cool World decades earlier.

If this all sounds a bit of a mess, it is. It’s not a fundamentally bad story at a conceptual level, but its execution is a jumble, and the twisted Cool World is an unpleasant place to have to spend time. The darkness of the story is actually toned down from Bakshi’s original concept (which had an underground cartoonist fathering a half-real / half-cartoon daughter who tries to kill him), but only so much: it’s still full of sex, references to sex, 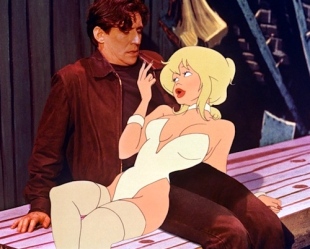 and general depraved behaviour. It’s clear it got caught in the crossfire between a creator/director who wanted to make a hard-R adults-only animated/live-action movie, and a star and producer who wanted to make something they could show to sick kiddies in hospital. The end result surely satisfies neither, because it pulls some punches to not get that R, but there’s no way this is kid-friendly.

It came out a few years after Who Framed Roger Rabbit, and suffers from the comparison. It’s not just that Cool World is a less successful riff on the same concept, or that its storytelling is more muddled, but it’s less technically proficient too. The animation and live-action elements never gel as well as in Roger Rabbit, with plenty of lazy eye-lines and actions not quite lining up. This probably explains why Byrne and Pitt both give lacklustre performances, not that Basinger fares any better.

There’s some interesting stuff in Cool World, which is why I haven’t sunk it to the irredeemable depths of a single star, but the merits are slight and not worth the effort. Apparently it does have something of a cult following, though, so the adventurous may still feel it’s worth a visit.

Cool World featured on my list of The Five Worst Films I Saw in 2016, which can be read in full here.