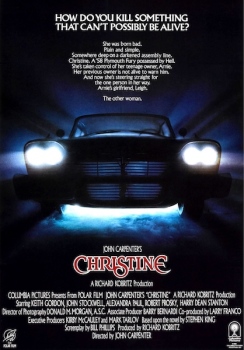 One of a couple of films John Carpenter directed “for hire” in an attempt to restore his Hollywood reputation after the box office failure of The Thing, Christine is an adaptation of a Stephen King novel about a car possessed by evil. Yes, a car. I guess if you wait long enough, anything and everything will be possessed by evil eventually (in fiction, at any rate).

Despite that pedigree, Christine is about as scary as… well, I was trying to think of something soft and fluffy that hasn’t ever been used in a horror movie, but that list is increasingly short. But you get my point: it’s not scary. Its 18 certificate is earned by an abundance of very strong language — which, according to screenwriter Bill Phillips, was added for that exact purpose: the film wasn’t violent enough to get an R, and they didn’t think people would see it if it was a PG (this being before the PG-13), so they just inserted a lot of swearing. It’s still a pretty entertaining film, though, thanks to some humour and the almost-there thematic subtext of America’s obsession with the automobile.

The central (human) character is Arnie, a nerdy teen who becomes obsessed and then empowered by the eponymous vehicle. Keith Gordon is pretty good as this “worm that turned” type, albeit in a somewhat melodramatic way: he’s a heightened version of a nerd at the start, and a heightened version of a car-obsessed teenage dick later on. One review I read reckoned the film “sacrifices character logic” — what, there’s a flaw in the logical behaviour of a guy who’s semi-possessed by his demonic car, you mean?

Even if Carpenter was doing it only for kudos with the studios, he still turned in solid work. Christine may not be scary, but she is menacing, and her attacks work as individual sequences. Unsurprisingly it’s not his strongest film, and it’s not the greatest adaptation in the Stephen King movie canon either, but if all movies by jobbing filmmakers were this good then we’d be luckier moviegoers.

Christine is one of the first releases from new UK Blu-ray label Indicator, out today.