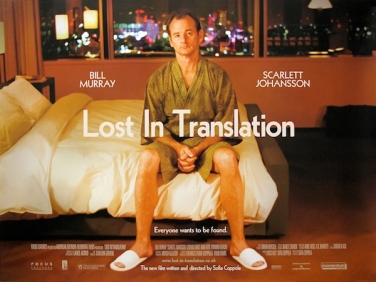 Everyone wants to be found.

The Story
In Tokyo to shoot a lucrative whiskey commercial, one-time movie star Bob Harris battles with middle-aged ennui. In his hotel he encounters Charlotte, a recent Yale graduate who’s tagged along with her entertainment photographer husband, and feels similarly untethered by life. Perhaps these two lost souls will find something in each other…

Our Heroes
“I just feel so alone, even when I’m surrounded by other people,” says Charlotte, succinctly assessing the life situation of not only herself, but also her new friend, Bob. He’s dryly amused by the world (who better than Bill Murray for that role?), struggling to connect with his wife back home who pesters him with questions about carpet colours. Charlotte, unsure what to do with her life after graduating from university, and finding her husband and his acquaintances to not be on her level, is a kindred spirit, despite the age gap.

Our Villain
Not strictly a villain, but Charlotte’s husband is hardly the most inspiring figure in her life. Not a strong basis for a marriage, really.

Memorable Quote
“Let’s never come here again because it would never be as much fun.” — Charlotte

Memorable Scene
After an exuberant night out, Bob and Charlotte sit quietly side by side in a karaoke joint’s hallway. She slowly lowers her head on to his shoulder, smiling to herself, while he stares into the distancing, participating in the moment but also not. To quote further from my ‘What the Public Say’ selection, “it expresses the connection, and simultaneously, the quiet distance that still exists between them (mostly in their minds). It’s romantic without really consuming the romance.”

Making of
Bill Murray no longer has an agent, instead maintaining a voicemail number that he rarely gives out. Sofia Coppola reportedly left hundreds of messages on it, having written the part of Bob especially for him. Eventually he called her back, but still only gave a verbal commitment to appear — she wasn’t sure he was actually going to show until the first day of filming, when he did.

Awards
1 Oscar (Original Screenplay)
3 Oscar nominations (Picture, Actor (Bill Murray), Director)
3 BAFTAs (Actor (Bill Murray), Actress (Scarlett Johansson), Editing)
5 BAFTA nominations (Film, Director, Original Screenplay, Cinematography, Music)
FIPRESCI Prize (to Sofia Coppola for “the cool detachment and freshness with which she observes the antics of various American and Japanese television and communication industry people in the anonymous surroundings of a large Japanese city, and for the sensitivity with which she modulates the atmosphere of the film from comedy to melancholy.”)
1 MTV Movie Awards Mexico nomination (Funniest American in Japan — it lost to Tom Cruise in The Last Samurai)

What the Critics Said
“Lost in Translation revels in contradictions. It’s a comedy about melancholy, a romance without consummation, a travelogue that rarely hits the road. Sofia Coppola has a witty touch with dialogue that sounds improvised yet reveals, glancingly, her characters’ dislocation. She’s a real mood weaver, with a gift for […] mining a comic’s deadpan depths. Watch Murray’s eyes in the climactic scene in the hotel lobby: while hardly moving, they express the collapsing of all hopes, the return to a sleepwalking status quo. You won’t find a subtler, funnier or more poignant performance this year than this quietly astonishing turn.” — Richard Corliss, TIME

What the Public Say
“It’s an incredibly quiet film, with little narrative or story-related dialogue. We follow Bob and Charlotte as they gently explore their environment and grow towards each other, and it feels like we’re watching seaturtles swim together. It’s all very graceful and beautiful, and quiet, and meandering, and slow. And I mean that in a good way […] For a film that explores disconnection and loneliness, to me there is no better way to frame that story.” — Reinout van Schie, One Shot

There seems to have been a glut of “men coming to terms with their place in the world”-type movies in the early ’00s, for whatever reason. (I’m not sure there was before that? There have been plenty since, though they can feel like hangers-on.) Some once-popular ones have turned into objects of derision (Garden State), but I think others hold up. No doubt the quality of the BAFTA-winning performances of Bill Murray and Scarlett Johansson have a lot to do with that, creating a cross-generational pairing of two lost souls that feels real and touching, rather than tipping into some creepy love affair thing. Nonetheless, through to its ending the film plays with variations on melancholy — a difficult feeling to evoke in movies, in my opinion, but a level writer-director Sofia Coppola here hits with impressive consistency.

#57 will be… Denzel Washington in flames.