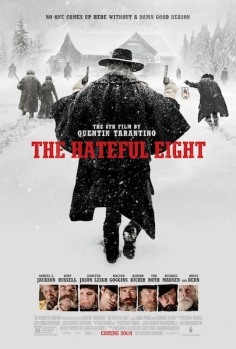 Quentin Tarantino hadn’t made a film in the same genre as his preceding movie for almost 20 years when The Hateful Eight came out — his second go-round with the Western genre, after the Spaghetti-ish thrills of Django Unchained three years earlier. Aside from the setting and its accoutrements, however, The Hateful Eight has more in common with Tarantino’s debut feature, Reservoir Dogs.

Wyoming, sometime after the Civil War: bounty hunter Major Marquis Warren (Samuel L. Jackson) flags down a stagecoach driven by O.B. (James Parks), looking for transport to Red Rock. Inside is fellow bounty hunter John Ruth (Kurt Russell) with his latest catch, Daisy Domergue (Jennifer Jason Leigh), who’s worth $10,000 — naturally, Ruth is suspicious of Warren’s motives. Later, they pick up Chris Mannix (Walter Goggins), who claims he’s to be sworn in as the new sheriff of Red Rock — also of great suspicion to Ruth. As a blizzard chases them, the quintet seek shelter at Minnie’s Haberdashery, a rest spot Major Warren has clearly visited many times before. However, Minnie isn’t home, and care of her establishment has been left in the hands of Bob (Demián Bichir). Inside, they find fellow travellers Oswaldo Mobray (Tim Roth), Joe Gage (Michael Madsen), and General Sandy Smithers (Bruce Dern). Ruth doesn’t trust a’one of them — and as they settle down to ride out the blizzard, it turns out he’s right about someone…

I’m not the first to observe that The Hateful Eight actually functions like a murder mystery, Agatha Christie style. It might be easy to miss because the film doesn’t begin with a murder or feature a detective, but then neither do all of Christie’s stories. Instead, there’s a long period setting up all the players and suggesting their motivations, and then eventually the proverbial does hit the metaphorical fan, after which deductions must be made. 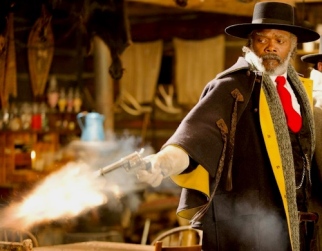 And it’s all in a remote, isolated location which has been cut off by weather, and every character is hiding some nefarious past — so far, so And Then There Were None. All of this comes dressed in QT’s famed dialogue, unfurled at the somewhat languorous pace he’s gradually been cultivating for a few movies now, and topped off with a few doses of the old ultra-violence.

One reason the “whodunnit” label doesn’t really stick is that Tarantino doesn’t sit it out until the end. Without spoilers: there’s certainly mystery about who is and isn’t involved, but you can’t invest in that too much because the answer is a little bit Murder on the Orient Express. Not completely Orient Express (I said no spoilers!), but a bit. One factor he does handle well is that (again like And Then There Were None) you can never be quite sure whose side you should be on; who might turn out to be a villain. Even at the end, when all has been revealed, the heroes are hardly heroic.

More talked about than the film’s content has been the way it was made. Despite the confined setting, Tarantino chose to shoot it on 65mm film, using the Ultra Panavision 70 process (only the 11th film to do so) and lenses that hadn’t seen light in nearly five decades, all of which have produced incredible images. QT’s regular DP since Kill Bill (excepting Death Proof), Robert Richardson, has once again done sterling work, with beautiful shots of scenery near the start and a fantastic definition of space once we’re locked up in Minnie’s. 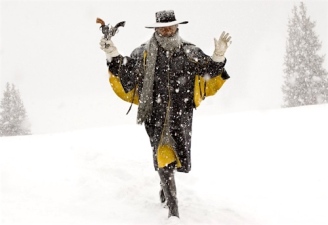 Ultra Panavision 70 produces an ultra-wide 2.76:1 frame (for those not in the know, your widescreen TV is only 1.78:1), which for such an intimate story has struck people as odd ever since it was announced. In fact, it pays off in (at least) two ways: firstly, all the scene-setting scenery looks magnificent; secondly, for a lot of the film there’s stuff going on in the background or at the edge of frame — it’s not just a series of close-ups or two-shots where the ancillary detail is either non-existent or doesn’t matter, but one where that ‘background’ detail is sometimes very instructive to what is going on. Tarantino also uses the full width a lot of the time, placing two figures at either edge of the image — this really isn’t a film you could crop (thank goodness it doesn’t exist in the pan & scan era!)

Richardson’s work was Oscar nominated but lost to The Revenant (which I’m now a little biased against, after it beat this, Fury Road, and handed Roger Deakins his 13th loss, but I’ll see what I think when it finally hits British home ent formats next month), but the film did triumph for Ennio Morricone’s score — and quite rightly so, too, because it’s incredibly atmospheric and effective. Tarantino has commented that it isn’t really a Western score (which you’d expect from Morricone, what with his famous ones), but more of a horror movie score, and that that’s appropriate for the film. And, y’know, that’s not pretentious director-speak — he’s right. Well, that the movie is a horror movie is debatable, but he is right that Morricone’s work sounds more like a horror score, and that that score is appropriate to this movie. It even recycles some of Morricone’s material from The Thing, 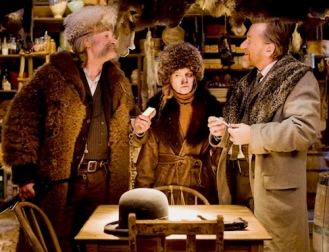 as if to bring the point home (and that’s far from the only thing about The Hateful Eight that’s indebted to The Thing, but I’ll leave that for someone else to dig into another time). Even though this is the first time he’s had a full score composed for one of his films, Tarantino still sources a couple of well-selected songs from elsewhere, including a very apt credits track by Roy Orbison.

The Hateful Eight may have a deceptively simple story, with straightforward characters and — once they’re finally all revealed — straightforward motivations; and despite that running time, it’s not as grand or as epic as either Inglourious Basterds or Django Unchained; but I say “deceptively simple” because I feel that it’s the kind of film that might reward repeat viewings, to reveal depths of character as well as hints toward the ultimate reveals. Or maybe I’m being generous — maybe it is just a long-winded, verbose way of telling a slight tale. But if it is, it’s still a mighty entertaining one.

The Hateful Eight is released on DVD and Blu-ray in the UK today.