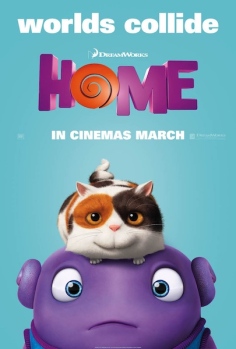 Oh (Jim Parsons) is a Boov, a race of friendly aliens looking for a new home planet to escape their enemies. When they arrive on Earth, Oh tries to invite everyone to a party, but accidentally alerts their enemies to their new home. Outcast, he bumps into Tip (Rihanna), a girl accidentally left behind when the rest of mankind was relocated by the Boov. Desperate for friendship, Oh agrees to help her find her mother.

Initially I ignored Home, because nothing about it looked particularly inspiring. But I’ve been wrong about CG kids animations before (How to Train Your Dragon; Cloudy with a Chance of Meatballs), so when I happened to see the trailer and it amused me, I decided to give it a go. Unfortunately, characters and affectations that are amusing in the form of highlights lasting two minutes quickly grate in the film proper.

Home’s biggest problems are all in its most fundamental aspect: the story. It doesn’t just have plot holes — the whole premise and inciting incident don’t even hang together. I don’t believe this is just a movie for little kids, I reckon it was written by them too. That’s surely the only way to explain its absence of plausible logic.

Why do the Boov speak English? Why do they speak it wrong? Why does Oh speak it so much more wrong than any other Boov? Why do they know the words for things they have no concept of? Why would humanity accept total relocation without any kind of response? How would only one girl on the entire planet be missed? How would she have had time to come to hate the Boov enough to make multiple pieces of anti-Boov art and set up an elaborate Home Alone-style trap in her apartment when the film suggests the Boov arrived just a couple of hours earlier? How does she know how to drive? If she’s old enough to know how to drive (and to be voiced by Rihanna), why does she do art that looks like it’s by a six-year-old? Why do the Boov make recognisable monuments float in the air? Why would a communication device’s two options be “send to one person” and “send to not only the entire species, 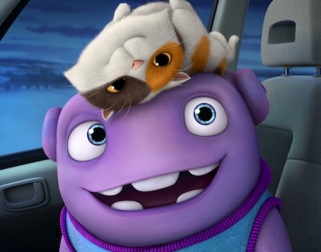 but the entire universe, including our enemies”? Why is there no option to cancel such a transmission that is going to take 40 hours to reach said enemies? I mean, that last one’s a stupid question, because why is there even a way to message the enemies?

And those questions are just from the first 15 minutes.

Tip’s full name is Gratuity Tucci, which may just be the most implausible name in the history of the world. Our heroes spend a chunk of the middle of the film just driving across the Atlantic (don’t ask) doing things like listening to Rihanna music (you mean, they listen to songs by the lead voice actress? What a coincidence!) Sometimes the film is scored with such Popular Songs, often tweeny crap, but other times it’s blandly generic Movie Music. Either would be an adequate creative choice, albeit resolutely unremarkable, but having both at random is distractingly schizophrenic. And the songs don’t even have accurate relevance to what’s happening.

Story aside, Home is not poorly made, and there are fleeting glimmers of entertainment. Which is damning with faint praise, really. Naturally, I don’t recommend you waste your time on it.

Home featured on my list of The Five Worst Films I Saw in 2016, which can be read in full here.