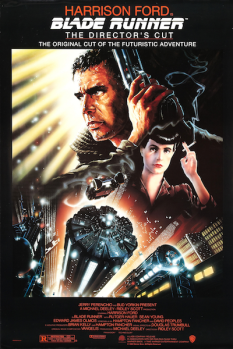 The original cut of the futuristic adventure.

For clarification: as I didn’t see The Final Cut until after 100 Films started, and I’ve still not seen the theatrical cut, it’s only the 1992 Director’s Cut that is eligible for this list.

Based on
Do Androids Dream of Electric Sheep?, a novel by Philip K. Dick.

The Story
L.A., 2019: cop Rick Deckard is dragged out of retirement to hunt and ‘retire’ a gang of Replicants — genetically-engineered androids, almost indistinguishable from humans, used for menial work off-world — who have come to Earth to extend their lives. As Deckard investigates, he comes to question what it means to be human…

Our Villain
Roy Batty, definitely a Replicant. Committed the crime of wanting to live.

Best Supporting Character
Rachael — secretary, love interest, Replicant but believes herself to be human. Do we see a theme developing here?

Memorable Quote
“I’ve seen things you people wouldn’t believe. Attack ships on fire off the shoulder of Orion. I watched C-beams glitter in the dark near the Tannhauser gate. All those moments will be lost in time, like tears in rain.” — Roy Batty

Memorable Scene
At the imposing headquarters of the Tyrell Corporation, blade runner Holden sits employee Leon in front of a strange machine. He begins to administer a Voight-Kampff test, a series of questions designed to provoke a response that the machine analyses. “You’re in a desert, walking along in the sand, when all of a sudden you look down…” “What one?” “What?” “What desert?” Leon’s test isn’t going to go according to plan…

Memorable Music
The synthesised score by Vangelis should by all rights sound terribly dated and oh-so-’80s by now, yet it’s somehow timelessly futuristic.

Technical Wizardry
Visually, Blade Runner is a non-stop marvel: the noir cinematography, the vehicle and set design, the lived-in world, the believable effects… The entire thing is imaginatively conceived and magnificently realised with unwavering plausibility.

Truly Special Effect
The realisation of future-L.A. airspace — packed with giant skyscrapers, videoscreen adverts, flying cars, at night and in the rain — is literally faultless, and only gains impact for being achieved for real with models.

Making of
The Director’s Cut came about after a 70mm print was discovered in storage and an LA cinema got permission to screen it at a film festival in 1990. Only then did anyone realise the print was the workprint version of the film. Warner Bros organised more screenings, advertising them as a “Director’s Cut”. Ridley Scott wasn’t best pleased, which led to some screenings being cancelled. The rest sold out, however, and so Warner decided to create a genuine Director’s Cut. With Scott busy on other projects, film preservationist and restorer Michael Arick was put in charge, using notes and suggestion from Scott to do the best he could. Although Scott considered it better than the theatrical cut, he was never wholly happy with the ’92 version, which ultimately led to the creation of The Final Cut another 15 years later.

Next time…
Between 1995 and 2000, Philip K. Dick’s friend K.W. Jeter continued Deckard’s story in three novels, which apparently attempt to resolve the differences between Blade Runner and Do Androids Dream of Electric Sheep? In 1997, Westwood Studios and Virgin Interactive released a “sidequel” point-and-click adventure game, where you play as another blade runner in a storyline that takes place alongside the movie (it’s excellent, by the way, though I imagine you’d have a nightmare making it run today due to its age, which is a shame). Finally, a long-mooted sequel is in development for a January 2018 release.

What the Critics Said
“This is, [Scott] says, the version he would have released in 1982 if he could have. The Ford narration was added because the studio feared audiences would not understand his story of a futuristic Los Angeles. The new ending, which is ironic and inconclusive and gives Ford an existentialist exit line, was of course dropped by studio executives for a more standard violent outcome. I watched the original Blade Runner on video a few years ago, and now, watching the director’s cut, I am left with the same over-all opinion of the movie: It looks fabulous, it uses special effects to create a new world of its own, but it is thin in its human story.” — Roger Ebert

What the Public Say
“Its such a dark movie, but such a sad movie too. The sadness threatens to overpower everything. A character has her whole life undermined when she learns she isn’t real, not even her memories or experiences. It’s all a lie, a fabrication, as she is herself. Rick Deckard may not even be real. He might be just the same as Rachael. It’s not an idea I subscribe to, but it’s there, a possibility hanging over everything, underlined by the origami unicorn that he finds at the close of the film.” — ghost of 82

Elsewhere on 100 Films…
I reviewed The Final Cut in 2009, noting that it was “undeniably one of the most significant films of the last quarter-century thanks to its enduring influence. […] its dystopian future — all constant night-and-rain, busy streets, neon advertising, canyon-like decrepit skyscrapers towering over dirty streets, high technology rubbing with the everyday detritus of humanity — has been copied everywhere. Without this there’d probably be no Ghost in the Shell, no Dark City, no Matrix, no re-imagined Battlestar Galactica, no thousand other things that have nothing close to the brains but do have the look, the style, the feel.”

Blade Runner remains something of a divisive film: its thoughtful pace is not to everyone’s taste, especially if they’re expecting a sci-fi action-thriller starring Future Indiana Jones. Instead, it’s a philosophical sci-fi noir, as concerned with issues of what it means to be human as with chases or punch-ups. Remixing sci-fi and film noir influences in a fresh style, realised with some of the greatest design, set-building, and special effects of all time, it’s been inestimably influential on swathes of sci-fi that followed in its wake — and yet, almost 35 years on, it still looks futuristic and feels unique.