It was inevitable that the sheer size of September’s accomplishment would overshadow whatever I watched in October. After all, it was my highest-viewing month for over eight years — how long would it be before I could say that again?

Turns out: one month. 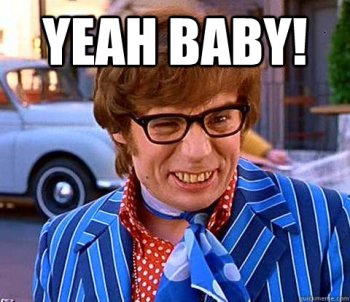 (Alright, I promise to never use memes again.)

In a conversation in last month’s comment section, Tom of Digital Shortbread observed that my monthly updates had “lots and lots of stuff to take in”. As I responded, “I think I may have overloaded these monthly posts,” and I think I was right.

So this month I’ve slightly pared back, simplified, and rearranged (you can now find the Arbies right at the end, here) to focus in on what these are meant to be about: a progress report on my eponymous goal. Exorcised categories may resurface in other forms later, and things will be even more streamlined from December when my archive reposts are complete — and when I haven’t watched the most number of films ever, of course — but this is fundamentally it for the new new-look monthly updates.

The first thing I’ve done away with is the contents list, so it’s straight in to:

After discussing last month the uncertainty of how many films I watched in August 2007, which makes it hard to know whether it’s been surpassed or not… well, this month I soundly, definitively, unquestionably overtook it: that long, long list above adds up to 31 new feature films.

Now I just need to do it twice more and the August 2007 issue can be put to bed forever. I can tell you for nothing, it won’t happen this year (but we’ll come to that).

So what else is there to say about those 31 films? Well, obviously it maintains my ten-per-month goal, for the 17th month in a row now. It’s also the second month in a row with over 20 films, the first time that’s ever happened… which is unsurprising when you remember that before 2015 I’d only ever had one month with over 20 films. It also surpasses last October’s tally, because, obviously. That’s a full 12 consecutive months besting the previous year’s counterpart. And it goes without saying that it’s the best October ever (by 17) and the best month of 2015 (by eight).

For most of 2015 the rolling monthly average has been 15 films per month. September dragged it up to 15.67, the first time it had been closer to 16 since January was 16. October’s tally is pretty much double that, in the process single-handedly dragging the average all the way up to 17.2! It has even more of an effect on the all-time October monthly average, which goes from 10.0 to 12.6.

And all other year-to-date and entire-year records have already been smashed in previous months, so that’ll next be worth discussing after December.

Now, let’s calm back down, because there are challenges in the way of such a bold target: later in November I’m away for most of a week, and there are a couple of time-filling TV series on the way (more on that in a bit), which will likely roll over into December, and before you know it it’ll be Christmas and all the travelling and spending time with family will hamper proceedings somewhat. Damn family.

Away from the real world and in the realm of numbers and statistics, though, we can conjure up the following array of possibilities. If I only reach my historical average viewing levels for November and December, I’ll make it to 190 — and thereby miss the aforementioned ten-per-month target, so I’ll be thoroughly upset with myself if that happens. As mentioned, achieving that target for two more months places me at 192. If I continue my other on-going streak — of surpassing the same month last year — than I’ll wind up at 202. If I manage the monthly average that I maintained for most of the year, that also puts me at 202. If I can hold up the new average of 17.2, though, I’ll get all the way to 206.

This month’s flood of reposts takes us all the way through my recaps of 2008 to 2011, leaving the way clear for next month to be all about the year-end summary posts.

Then it was on to the first ever monthly updates, which cover the bulk of 2010:

Finally, the entirety of 2011, across twelve monthly updates:

Now, 2011’s summaries are already online — you can peruse the full list and all the exciting statistics here, and learn about my top ten and bottom five here. Next month, as I mentioned, I’ll be reposting the summaries for 2007, 2008, 2009, and 2010, one year per weekend.

Favourite Film of the Month
In a month with so many films, there’s a fair chance a lot of them will be good — indeed, 15 of October’s films are on the long-list for my year-end top ten (I’m quite liberal with what goes on that list, but still). Pushing aside mind-boggling done-for-real action, hugely successful reboots of childhood favourites, atmospheric Gothic thrillers, and thoroughly terrifying horrors, is a little documentary that was shown in the middle of the night on Channel 4 about a bunch of amateur filmmakers in India. The only one of those 15 to have definitely reserved a place on my top ten is the life-enhancing Supermen of Malegaon.

Least Favourite Film of the Month
Similarly, in a month with so many films there’s a fair chance a few of them will be bad. There would indeed be a few contenders for the October wooden spoon, but they were all saved the dishonour by a rare single-star film: dull arthouse SF Parabellum.

Film You Have to Be Most Careful How You Talk About In Case Someone Thinks You’re a Paedophile or Something
One minute it’s Arya Stark having a sexual awakening about her brother, the next it’s Alice in Wonderland having an orgasm when she plays the piano. I think October’s pair of erotically-charged movies starring schoolgirls, The Falling and Stoker, can share this one.

Biggest Nostalgia Hit of the Month
It was pretty special to relive some of my childhood favourites through the documentaries Turtle Power (I had so many of the toys they showed!) and Back in Time (I really need to re-watch the BTTF trilogy), but this honour goes to the hair-raising thrill elicited when John Williams’ memorable theme swells under the unveiling of a place full of wonder in Jurassic World.

The Audience Award for Most-Viewed New Post of the Month
This crown was claimed and re-claimed several times during the month, but the final victor may not be that surprising: my moderately-speedy spoiler-free first thoughts on that always-popular topic, a new James Bond film: Spectre.

Jessica Jones comes to Netflix and The Man in the High Castle comes to Amazon Prime — on the same day, frustratingly. I won’t be reviewing either, but they’ll ultimately eat up around 23 hours of my potential film-viewing time, so let’s expect a smaller-scale month than I’ve achieved of late.

In amongst all that, hopefully I’ll finally find time to bloody well re-watch the Veronica Mars movie and bloody well get bloody 2014 bloody finished.

Also, when we meet again for one of these round-ups it’ll be December (already?!) and I’ll be launching my 2015 advent calendar, too. What larks!