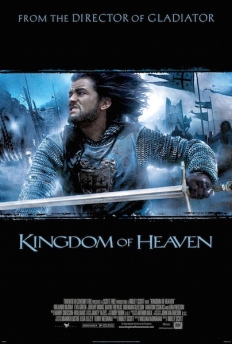 Ridley Scott’s Crusades epic is probably best known as one of the foremost examples of the power of director’s cuts: after Scott was forced to make massive edits by a studio wanting a shorter runtime, the film’s summer theatrical release was so critically panned that an extended Director’s Cut appeared in LA cinemas before the end of the year, reaching the wider world with its DVD release the following May. The extended version adds 45 minutes to the film (and a further 4½ in music in the Roadshow Version), enough to completely rehabilitate its critical standing.

The story begins in France, 1184, where blacksmith Balian (Orlando Bloom) is something of a social pariah. Offered the chance to head off to fight in the Crusades, Balian… refuses. But then something spoilersome happens and he thinks it might be a good idea after all. When he eventually arrives in Jerusalem, he finds a kingdom divided by political squabbling, quite apart from the uneasy truce with the enemy. You know that’s not going to end well.

Kingdom of Heaven is, in many respects, an old-fashioned epic. It’s a long film not because the director is prone to excess and didn’t know when to cut back, but because it has a lengthy and complicated story to tell. It isn’t adapted from a novel, but the structure feels that way, spending a lot of time on characters and what some might interpret as preamble — it’s a long while before the movie reaches Jerusalem, ostensibly the film’s focus, and it completes the arcs of several major characters along the way. The scale of such stories isn’t to everyone’s taste, but, well, what can you do. 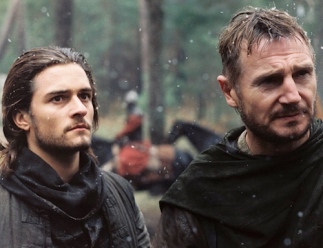 A strong cast bolsters the human drama that sometimes gets lost in such grand stories. Bloom is a perfectly adequate if unexceptional lead, but around him we have the likes of Michael Sheen, David Thewlis, Alexander Siddig, Brendan Gleeson, and Edward Norton (well done if you can spot him…) There are even more names if you look to supporting roles. Most notable, however, are the co-leads: both Liam Neeson, as the knight who recruits Balian, and Jeremy Irons, as the wise advisor when he gets to Jerusalem, bring class to proceedings, while Eva Green provides mystery and heart as the love interest. Of everyone, she’s best served by the Director’s Cut, gaining a whole, vital subplot about her child that was entirely excised theatrically. It’s the kind of thing you can’t imagine not being there, and Scott agreed: it seems the chance to restore it was one of his main motivators for putting together a release of the longer version.

It is very much a Ridley Scott film, too. The way it’s shot, edited, styled… you could mix bits of this up with Gladiator or Robin Hood and you might not realise you’d switched movie. As a student of film it frustrates me that I can’t put my finger on exactly what qualities define this “Scott style” — and it’s a specific one to his historical epics, too, because it’s less present (or possibly just in a different way) in his modern-day and sci-fi movies — but I’m certain it’s there. I guess it’s the way he frames shots, the mise-en-scène, the editing, the richness of the photography… The quality of the end result may vary across those three movies, but Scott’s technical skill is never in doubt. 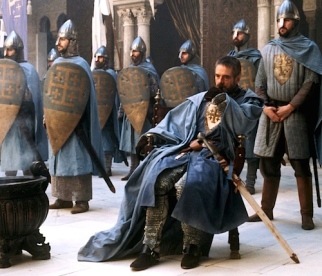 (I’d wager Exodus is the same, but its poor reception hasn’t exactly left me gagging to see it.)

Similarly, I can’t quite identify what’s missing from Kingdom of Heaven that holds me back from giving it full marks. It’s a je ne sais quoi edge that I just didn’t feel. I do think it’s a very, very good film, though; one that would perhaps well reward further viewings.

A version of Kingdom of Heaven is on Film4 tonight at 9pm. Their listings suggest it’s the theatrical cut, though if that’s true then they’ve put in an hour-and-a-half of adverts…

* For what it’s worth, I actually watched what’s now called the “Director’s Cut Roadshow Version”. This was released as the Director’s Cut on DVD, but in the early days of Blu-ray it couldn’t all fit on one disc, so they lopped off the overture, intermission, and entr’acte and still labelled it the Director’s Cut. As of the 2014 US Ultimate Edition, however, those missing bits have been optionally restored, with the set containing ‘three’ versions of the movie. ^