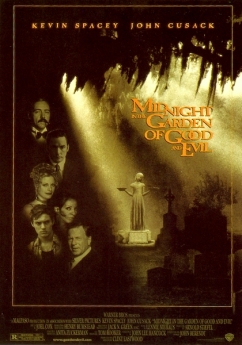 Sent to write “500 words on a Christmas party” in Savannah, Georgia, journalist John Kelso (John Cusack) instead finds himself covering a murder trial where he’s become friendly with the accused (Kevin Spacey).

Based on the bestselling book of a true story, Midnight in the Garden (as my TV’s EPG would have it) benefits from that reality to guide it through the quirky locals and unusual turns of its true-crime plot — there’s no doubt that Spacey killed the man, but the exact circumstances of the act are disputed. There’s been some movieisation in the telling of the events (the shooting happened in May; there were four trials, here condensed to one; a romantic subplot for Kelso is a (clichéd) addition), but the sense that enough of the truth remains keeps the film inherently captivating.

That’s handy for the film, which almost leans on the “it’s all true!” angle as a crutch to help the viewer through its own production. Eastwood’s direction might kindly be described as “workmanlike” — it’s strikingly unremarkable. Cusack is as blank as he ever seems to be (have I missed his Good Films that once marked him out? I say “once” because he’s only a leading man in shit no one notices these days). He’s fine, just borderline unnoticeable, which is why the romance subplot feels so misplaced — he’s an audience cipher to access this interesting location and set of events, not a character in his own right. Apparently Ed Norton turned down the role — now he might’ve brought some personality to it. Spacey is worth watching, at least.

Like many an “adapted from a bestseller!” movies, I guess Midnight in the Garden was a big deal in its day that’s faded to semi-obscurity since (see: Captain Corelli’s Mandolin, increasingly The Da Vinci Code, and on and on). It’s no forgotten masterpiece, but has enough going for it to merit a rediscovery by the right people who’ll enjoy it. Like me. For that, much thanks to Mike at Films on the Box, whose insightful review I naturally recommend.