Marvel Studios takes its boldest step yet, moving away from the present-day superhero milieu of its previous movies to a galaxy far, far away for a space opera epic. Its success, both critically and commercially, has cemented the Marvel Cinematic Universe as an infallible force in the current movie world. But, really, how good is it?

The film, as I’m sure you know, sees a gang of misfits — Han Solo/Indiana Jones hybrid Peter Quill (Chris Pratt), Gamora (Zoe Saldana, adding “green-skinned alien” to her repertoire), literal-thinking muscleman Drax (Dave Bautista), racoon-like bounty hunter Rocket (voiced by Bradley Cooper) and his pet tree/bodyguard Groot (voiced by Vin Diesel) — come together around a mysterious item of immense power, that’s desired by villain Ronan the Accuser (Lee Pace) so he can do something nasty and destructive. Co-written and directed by James Gunn, of Super fame, Guardians of the Galaxy combines space-blockbuster thrills with irreverent comedy (the supporting cast includes the likes of John C. Reilly and Peter Serafinowicz) and an ironically-cool ’80s pop soundtrack.

Guardians is a massively entertaining movie — when it works. That happens when it’s character-driven, with characters talking and interacting and following the story (what there is of it). There should be nothing wrong with that, but as this is a modern blockbuster, there’s an unwritten rule about how many CGI-driven action sequences there must be. The point of such things is to provide excitement and drive, but they actually kill the film’s momentum rather than buoying it up. Gunn and co have plenty of originality and fun to dole out the rest of the time, but the majority of the action sequences are seen-it-all-before whizzy CGI. 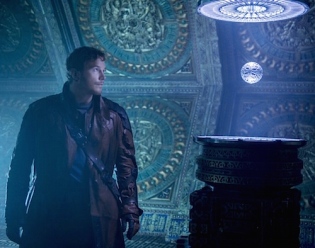 The worst offender is the pod chase through Knowhere, a several-minutes-long sequence that registers as little more than a blur. There’s a shocking lack of clarity to its images, even by today’s standards. Maybe it’s better in 3D, when I guess the backgrounds would sink into the distance and important elements would be foregrounded; but in 2D, you can’t see what’s meant to be going on for all the fast-moving colour and split-second cuts. Almost as bad, though for different reasons, is the climax. It takes up an overlong chunk of the movie and at times feels repetitive of too many other Marvel climaxes — oh look, a giant spaceship crashing into a city! If anything, the film gets ‘worse’ as it goes on. Perhaps not in a very literal sense, but as the blustering action climax takes over, it moves further away from the stuff that makes it unique and interesting.

Sadly, those feature don’t include the lacklustre villains. Marvel have been rather lacking in this department lately: Ronan the Accuser and his faceless minions are as bad as Christopher Eccleston’s lot from Thor 2, who were already rather like Avengers Assemble’s alien army… Henchwoman Nebula (Karen Gillan) has some potential, but she’s barely used. They make a point of her escaping, though, so maybe next time.

Even if the villains are underworked, the film is so busy establishing its large roster of characters (five heroes, three or more villains, plus an extensive supporting cast) that it doesn’t have time to fully paint the universe, either. We don’t really care when Nova City is being destroyed, because we only saw it briefly earlier on and had no reason to suspect we’d be going back there.

It isn’t even called Nova City, but I don’t have the foggiest what it is called because the film didn’t make me feel I should be learning it. Some more effort making sure we knew why that place mattered, even if it was just a clearer depiction of all the planning for its defence, might have sold the entire climax better.

Most people talk about Guardians in the context of its place in the Marvel Cinematic Universe, but it would probably be more interesting to compare and contrast it with other space opera films — that’s where its heart and style truly lies. These aren’t superheroes, they’re space rogues; to pick on two films from one of Marvel Studios’ top creatives, it’s more Serenity than Avengers. The main connection to the other Marvel films comes in the form of Thanos and his beloved Infinity Gems. It’s questionable if this is a little shoehorned in, and also a little bit Fantasy rather than Sci-Fi. Does forcing that in undermine the film? Or is it only because we know it ties into the Avengers side of the universe that it stands out? If we’re arguing that “it’s more fantasy-y than science-y”, perhaps we should pause to look at the most archetypal cinematic space opera, Star Wars: what’s the Force if not some mystical thingamajig?

Whatever the genre, Guardians leaves you with an instant feeling of having seen a top-quality blockbuster, thanks to its likeable heroes, abundant humour, frequent irreverence, uncommonly colourful visual style, retro-cool soundtrack, and so forth. Unfortunately, once you dig underneath that there’s a little too much that’s rote ‘modern blockbuster’, with the explosive action sequences being the main culprit. Many regarded it as the best movie of last summer; on the evidence I’ve seen, it would certainly seem to be the most fun. The character stuff will likely hold up well to repeat viewings, but the noise and bluster surely gets tiring, 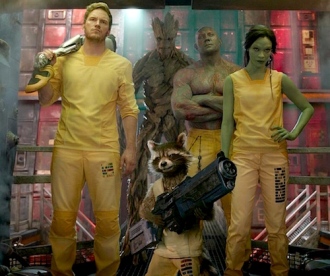 especially the overlong climax. Joss Whedon commented of his own Avengers film (as I quoted in my review) that it wasn’t a great movie but it was a great time, and I think that’s just as true here: when Guardians is firing on all cylinders, it’s difficult to imagine a more entertaining blockbuster space opera; but there’s too many merely-adequate bits that hold it back from joyous perfection.

This review is part of the 100 Films Advent Calendar 2014. Read more here.

For my thoughts on re-watching Guardians of the Galaxy in 3D, look here.