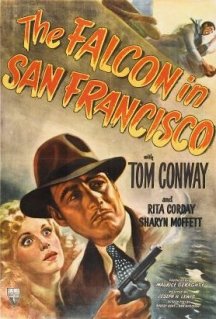 The Falcon is often dragged into adventures by beautiful women he can’t resist, but here it’s a female of a different kind — a little girl. After her nanny is murdered on the train to San Francisco, the Falcon offers to take her safely home… only to get arrested for his troubles, and then be picked up by a mysterious woman and her heavies and given a good beating. What the blazes?!

But this is the Falcon — he can’t leave well enough alone, and so soon finds himself thoroughly immersed in one of the series’ more densely and complicatedly plotted instalments. There’s that little girl, who is being kept prisoner with her older sister… or are they? There’s their evil butler… or is he? There’s the mysterious woman and her slap-happy henchman, and the man working against her, who’s also out to get the Falcon… or is he? The murdered nanny’s husband works for a shipping company and has just come in to port… or has he? There’s the shipping company’s manager, just an innocent bystander… or is he?

In short, barely anything is as it seems, the Falcon is in the dark about what’s going on for most of the film, and so are we… but of course he figures it out, then proceeds to leave us in the dark… until it’s all explained in a speedy series of double-crosses in amongst some heavy exposition during the final scene. Phew! 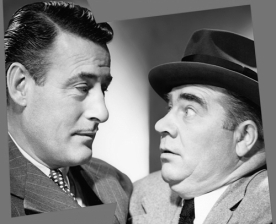 At least there’s some comic relief thanks to the return of the Falcon’s sidekick Goldie, who’s been absent since The Falcon Strikes Back (six films ago). He’s played by Edward S. Brophy, who was previously Detective Bates in the first Falcon film. After all that time away, Goldie will back in the next film, played by Vince Barnett; and then again in the one after that… played by Brophy. Ah, ’40s B-movies.

I’m not sure whether to give in San Francisco points for its intricate storyline or admonish it for being so darn confusing. At least it makes for a different kind of mystery from the usual whodunnit styling of the series recently; and even if the destination is frequently unclear, there’s fun to be had on the journey.

* As with the vast majority of the Falcon series, The Falcon in San Francisco hasn’t been passed by the BBFC since its original release. Nonetheless, it’s available on DVD, rated PG. ^