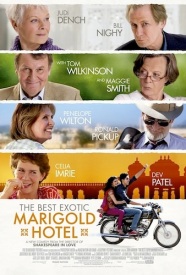 “Old fogies go to India” is the setup of this frothy comedy-drama that clearly courts the so-called ‘grey pound’ — i.e. older viewers still prepared to pay to go to the cinema. But when said fogies are played by Judi Dench, Maggie Smith, Tom Wilkinson, Bill Nighy, Ronald Pickup, Celia Imrie and Penelope Wilton, it will surprise no one to learn there’s something here for us all.

Mixing gentle humour with very modern themes and the odd tragedy, it’s an affecting brew. And such a box office success that there’s plans for a sequel! Never was a more unlikely franchise born.

In the interests of completing my ever-growing backlog, I decided to post ‘drabble reviews’ of some films — such as this one. For those unfamiliar with the concept, a drabble is a complete piece of writing exactly 100 words long.