It’s June! It’s the halfway point of the calendar year! What a good time to assess a year-long task, eh?

In the name of…

I can now unveil a major new undertaking (for me): the complete 100 Films review database, sorted by director.

Creating this page involved taking nearly 800 reviews from their title-sorted 28 categories on the existing list, looking up the director for each film, then re-sorting them into a new list that eventually came to include 537 categories (that being one per represented director, of course). It’s taken over four months of work (on and off), but it’s finally here — and is perfectly easy to update going forward, thank goodness.

I have no idea if this is of use to anyone. Probably not. But it’s a slightly interesting, different way of looking at my review archive. For instance, compiling it threw up some odd things, such as James Hill. Who, you may ask? Indeed it’s no surprise I hadn’t noticed I’d watched two films directed by him. More interesting was what they were: lovely family animal movie Born Free, and Hammer-esque Sherlock Holmes vs Jack the Ripper thriller A Study in Terror! He also directed Lunch Hour, part of the BFI Flipside strand, so he may one day acquire a third entry. That’s more than some incredibly well-known directors have.

Anyway, if you want to have a peruse and somehow missed the links above and the one in the menu, it’s here.

What Do You Mean You Haven’t Seen…?

Statistically speaking, my selection for WDYMYHS threw up a few interesting ratios. For instance, exactly half the films hail from the 1950s; there are 9 in black & white vs. 3 in colour; and also 9 in English vs. 3 in foreign languages (French, Japanese, Swedish); and 5 on DVD vs. 7 on Blu-ray.

Having so far watched a third of the films, it’s got to the point where I can see what needs to be done to keep these numbers roughly in proportion. So, if I wanted to do such a thing, I came to the conclusion that I needed to watch a 1950s black & white English-language film on Blu-ray. That left two options: The Night of the Hunter or Touch of Evil. And this month I watched…

No particular reason for choosing one over the other, although during the time I was pondering this the BFI announced their exciting Gothic season, the trailer for which included a clip from Night of the Hunter, which led to the thought that I might put it off until such a time as it coincides with whatever the BFI are up to. But we’ll see.

Those familiar with Evil’s multiple versions (there are five included on Masters of Cinema’s Blu-ray release) may like to know that I watched the Reconstructed Version in 1.37:1, as recommended here. 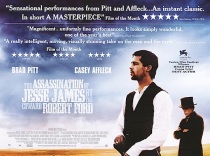 I talked last month about the shape of this year’s viewing emulating most previous years, and that continues in June, a month which has never seen my viewing reach double figures. Nonetheless, this year’s four is the poorest on record (behind last year’s five).

More interesting, however, is what it might tell us about the year as a whole. It’s exactly half way, after all, giving enough time to settle down from the exuberance of the year’s first three months and paint a picture of how I’m getting on this year. At 58, I’d call it “not bad”. Clearly I’m well over the halfway mark, and ahead of this point in 2008, 2009 and 2012 to boot… though as I failed to make 100 in two of those years, and only scraped it with a mad dash in the other, such facts aren’t that comforting.

5 Sequels That Killed Their Franchise

There have been innumerable bad sequels, especially in these franchise-driven days of modern Hollywood movies… but which have gone down so badly they’ve actually killed off their series? Not just been the final film, but actively led to the series’ demise. (This was inspired by The Bourne Legacy — although #5 is reportedly in development, if they don’t have a serious rethink then I expect Legacy will wind up a member of this club.)

And one that actually revived a franchise… briefly…

This fourth entry in the Death-defying horror franchise was due to be the series’ last — hence the definitive article title. In no small part due to being released in 3D in the immediate run-up to Avatar, the movie was a surprise box office hit, becoming the series’ highest-grossing entry, and New Line did an about-face and greenlit a fifth movie. Unfortunately for them, The Final Destination was utter shit, so the marginally-better Final Destination 5 became the series’ lowest earner. In the US, anyway — worldwide, it actually wound up just a few million dollars short of its predecessor. Nonetheless, instead of having a neatly-monikered send-off, the series seems to have limply disappeared.

There are many more sequels that have killed their franchise, so are there any I should have mentioned? And what about that even trickier question: films that have taken an ailing series and turned it around?

With the halfway point passed (did I mentioned we’re halfway through the year?), it’s full steam ahead into the second half. 100 films don’t just watch themselves, y’know.