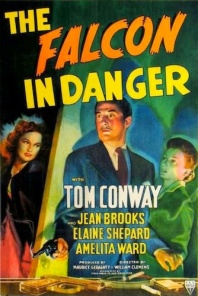 We’ve had the Saint in New York, in London, and in Palm Springs; soon we’ll have the Falcon in Mexico, in Hollywood, and in San Francisco; but here, he’s just in danger. He’s also in perhaps the best film either series has offered to date.

Ironically, the film begins with one of the worst plane crashes ever committed to celluloid. I’m not berating it for the special effects (they’re not incredible, but this is a ’40s B-movie — we’re not expecting much), but the way it’s shot and acted. The extras are appalling. Fortunately the film almost instantly picks up, offering a mystery worthy of Sherlock Holmes: said plane, noted as having several passengers when it left its previous location, is now completely empty of both passengers and crew. What the blazes?!

Fortunately, Tom Conway’s Falcon Mk.II is on hand to sort things out. It leads to a moderately intricate case of deception (of course — they didn’t really disappear), kidnap, ransom, theft, business intrigue, a suspicious antique dealership, a murderous guard dog, and a rollerskating rink (no, really). The humour is in shorter supply than in other entries — we’re mostly spared the bumbling cops, so it doesn’t suffer too badly for it. That said, the main ‘comedy’ comes from the Falcon’s latest fiancée, Amelita Ward as a Texan lass who’s distinctly annoying. Reviews abound that assert she completely ruins the film, but it’s not that bad.

Though the Falcon clearly agrees with everyone else’s assessment and shrugs her off as often as he can, to our benefit.

For I think the first time, the “distressed girl distracts the Falcon” coda actually leads into the next film (or seems to). Ironically, though that cast includes both of …in Danger’s female leads in new roles, the Hysterical Girl who leads the Falcon to it isn’t in it. Ah, ’40s cinema.

While some may lament the slightly more serious tone, then, The Falcon in Danger surely stands out as one of the more engrossing mysteries the series has to offer. I can’t say I’d complain if the remaining seven films followed such a line.

* As with the vast majority of the Falcon series, The Falcon in Danger hasn’t been passed by the BBFC since its original release. Nonetheless, it’s available on DVD, rated PG. ^