Nic Cage does the Taken thing with added CGI and supernatural posturing in this grindhouse-y actioner from the director of such inspiring films as The Prophecy 3, Dracula 2001 and the My Bloody Valentine remake.

The grindhouse style works for it. It’s got a crazy plot, crazy action, gratuitous violence, gratuitous nudity, rough production values, variable acting, loopy bad guys — the highlight is definitely the latter, with William Fichtner channelling Christopher Walken. The whole thing could do with being punchier and pacier, and shorter, but the out-there action, some bits of dialogue, and Fichtner make it almost worthwhile. None of it is especially memorable, but while it lasts it’s appreciably trashy.

That said, the sex scene fight is a steal from Shoot ‘Em Up, and not a very good steal. Slow-mo saps it of all tension or excitement. Other action scenes fare better, but by no means all of them. Edited by the director and his brother, I think they need to learn some new tricks to punch these scenes up a bit. It gets better as the film goes on and they have crazier material, but some of the early stuff is remarkably pedestrian.

The film’s promotion made a big point of being shot in 3D (instead of the usual style of “Drive Angry 3D”, the posters call it “Drive Angry Shot in 3D”), but most of the in-your-face “look it’s 3D!” stuff is CGI anyway. So would it benefit from being seen in 3D? 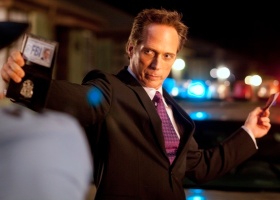 Only in that stuff flies at the camera and whatnot. You can indeed tell it was made for 3D, but that doesn’t mean it needs it. Indeed, the poke-the-audience stuff aside, none of it suggests it would look great in 3D — for all the pointlessness of cinema’s new money-spinning format, it can add something to the vistas in a film like Avatar. Drive Angry has nothing vaguely on that level.

These days your big blockbusters won’t get you change from $200m, so at $50m Drive Angry is a cheapy – which at least explains some of its low-rent looks. But it’s not that cheap, and the CGI is appalling. Some of it was of the level I’d expect from a direct-to-DVD mockbuster, and those are made for closer to $50 than $50m. In spite of the low cost, it did spectacularly badly at the box office. Even though it sold itself as “Starring Film Star Nicolas Cage” and “look there’s action!” and “look there’s a sexy girl!” (these are the three main things you get from the poster, and I imagine the trailers also), it opened a paltry 9th at the US box office and took just $28.9m… worldwide. Total. That’s only about 60% of its budget. Its poor performance makes it “the lowest-grossing opening of a 3D film released in over 2,000 US theatres”. Unlike some low-budget flops (Dredd 3D, I’m looking at you), this commercial failure doesn’t really bother me.

As noted, director Lussier does not have an inspiring CV: he started with numerous straight-to-video sequels, then a big screen sequel-no-one-wanted (even with Nathan Fillion in it) in White Noise: The Light, before what I guess must’ve been a modicum of success with My Bloody Valentine, which I seem to remember a (relatively) big fuss being made about because it was one of the first live-action things in true 3D or somesuch. Perhaps the massive flopping of Drive Angry will kill his career back off — his next project is apparently re-make threequel Halloween III, which I don’t imagine anyone anywhere is eagerly anticipating.

Drive Angry isn’t completely without merit, but it’s the kind of film where you have to hunt for the good stuff among the dross. Even as brain-off actioners go, you can do better.