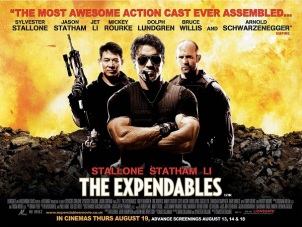 As The Avengers is to superhero movies, so The Expendables is to ’80s action films. More or less. I mean, this isn’t a character team-up, just an actor one… but these actors played essentially the same characters all the time anyway.

It’s also the kind of film that uses The Boys Are Back In Town on its end credits in a non-ironic way.

Set very much Now (it begins with a fight against Somali pirates), with no acknowledgement of the fact these guys might be a bit past it, the story concerns Sylvester Stallone’s gang of mercenaries being hired by a mysterious chap to overthrow the dictator of a small island somewhere that speaks Spanish. That’s about all you need to know, because the point of The Expendables is to have people shoot, punch, kick, stab and blow each other up. And that’s fine.

You see, this isn’t a reconstructed action movie, or a revisionist one, or an attempt to progress the genre in any other way. There’s an attempt to inject some kind of heart or introspectiveness into the characters, but nothing much out of the norm for the genre, and certainly nothing significant in the “I’m too old for this” department. (There’s an extended cut that adds even more of this, which sounds frankly unnecessary.) I think that annoyed some viewers, but maybe they should’ve more carefully considered what they were watching. This is a film that headlines Stallone and his modern-day equivalent Jason Statham, 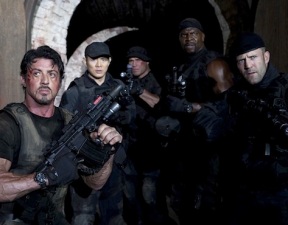 with a main cast fleshed out by ‘names’ like Randy Couture and Terry Crews. Hardly Al Pacino, or even Bourne-level Matt Damon.

What you do get is a film that revels in its action-movie-ness. I mean, most of the characters have great (read: daft) action movie names: Barney Ross, Lee Christmas, Yin Yang, Toll Road, Hale Caesar, Paine… How is that not a film aware of its own absurdity? How can you not enjoy that, even a little? Then there’s all the homoeroticism. Stallone goes for the full on camp look: bulging muscles, collagened lips, perma-tanned mahogany, little goatee, beret… Statham gets an early subplot with a love interest; Mickey Rourke is said to have a string of totty; Stallone almost has a love interest, but kind of rejects her at every turn. I’m sure you could easily entertain yourself by reading the film as him being in the closet — pair up his references to previous hurtful relationships with his animosity towards Schwarzenegger, for instance. Makes you wonder what Barney and Lee get up to on those long autopilot flights to and from the island…

Everyone gets their chance to shine, including those lesser names in supporting roles like Couture (pulling off something Stallone’s character can’t), Crews (with a wonderfully loud gun) and Steve Austin (kicking Sly’s ass). There are cameos from Bruce Willis (watch the gag reel — it seems he could barely be bothered to learn his lines) and Arnie (I know he was never a great actor, but was he always that bad?) They’re fun though, and help contribute a couple of memorable lines. 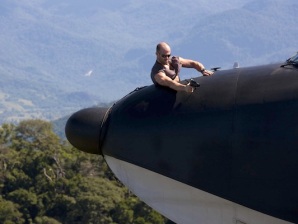 The main joy of the film is, of course, the action. There are plentiful big explosions, blood-spurting deaths, highly choreographed one-on-one punch-ups… It takes a bit of time to get going in this regard, too concerned with trying to give us a plot where we don’t need one and shadows of character development where we don’t want it, but when it kicks in it’s entertainingly bombastic. Particular stand-outs include a plane-based attack on a pier and the crazy climax, an everyone-on-everyone brawl that features a whole building exploding as just one small part.

And in traditional violent action movie style, it was even cut for UK cinemas. How thoughtful. Said edit was two seconds to get a 15; the BD (and DVD? I don’t know) is uncut. The edited moment was a stabbing, of which there are many, many examples in the film; but this one was deemed sufficiently worse than the others. Can’t say I blame the distributor making that cut — a tiny omission no one would notice, which gains three years’ worth of action-hungry teens with plentiful disposable income, your precise target market.

The Expendables, with its name-packed cast and throwback values, aims to be the action movie to end all action movies. It’s not quite that, but for those who enjoy the genre it ticks enough of the right boxes. It’s not reinventing the wheel, it’s not modern or cutting edge, but I don’t think it was ever truly aiming to be. It’s straightforward brain-in-neutral entertainment for Blokes, and as that it delivers suitably.

The UK TV premiere of The Expendables is on Channel 5 tonight at 9pm. It’s repeated on Wednesday 12th at 10pm.