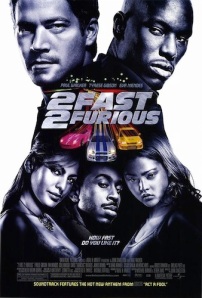 I never thought I’d watch, and certainly not enjoy, the Fast and the Furious series, but a few years ago (after the second film hit cinemas, I think — which would be almost a decade!) the first seemed to pick up a bit of praise from movie magazines and/or websites that were generally to my taste, so I gave it a go. I quite liked it, in the mode it was intended — a brain-off good-time action-y movie. I thought I was done there though, thanks to the much-maligned sequel — mainly because of its ridiculous title, which is still great fodder for a quick joke whenever a sequel is announced and people speculate on what it might be called. But sometimes, something compels you to give something a go…

Here, then, we find poor acting, a plot done by the numbers, and a style that sometimes feels like a rap video writ into a film. Oh dear. Yet the chases and other car-based action sequences are pretty coolly done, and there’s more of them than I remember there being in the first film. That’s a definite plus — really, it’s all you want from a film like this.

The drivers do a lot of trash talking… usually when they’re in cars by themselves. Oh dear. Then again, I regularly talk to myself when I’m driving alone, so either the film’s fine or I’m appearing in a trashy B-movie. Or just think I am. In a way, these poorer qualities — the dialogue, the acting, and so on — are part of the experience of the film, and somehow manage to endear it. So bad it’s good? At points, yes. 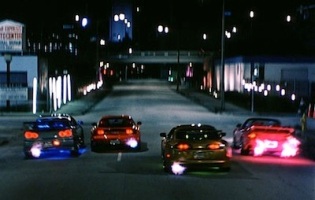 It’s worth noting it was directed by John Singleton, who started out with the acclaimed social drama Boyz n the Hood. How he’s fallen: via stuff you’ve never heard of to the Shaft remake, this, and most recently the poorly-reviewed Taylor Lautner From Twilight-starring Abduction. Well, each to their own.

Talking of crew, the music (well, the score) is by David Arnold, the recently-deposed Bond maestro. It was somewhat pleasing to see his name appear in the credits because I thought I could hear Bondian bits creeping in; I thought they’d just nabbed bits of the score from Die Another Day or something (such borrowing is not unheard of these days: I didn’t mention it in my review in the end, but I noticed during the credits that Unstoppable borrowed three cues from AVP, of all things).

In the UK, the film was cut by 11 seconds to reduce some violence and get a 12 certificate; later, it was re-rated uncut at 15. This is the kind of thing that really bugs some people — cue rants about the controlling nature of the BBFC — but, in instances like this, I couldn’t care less. For one thing it’s the distributor’s choice, not the BBFC’s. That’s not always wholly placating — see Casino Royale — but, sometimes, why care? So we lose “3 kicks, a stamp and a spit, all delivered to a prone man” — so what? The scene’s still in the film, there’s just less of it. I agree with people’s frustration when cuts are major, but in cases like this, perspective is needed. 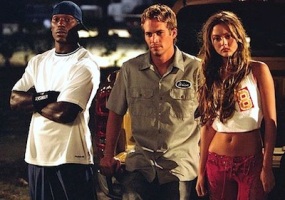 Ultimately, 2 Fast 2 Furious is like cheap fast food: you know it’s made of trash, high in fat and sugar, liable to rot something in your head — and just really bad for you fullstop… yet it’s an enjoyable guilty pleasure once in a while. If you don’t identify with that feeling then you’re a better man than me, and you’ll probably never like this film.

By rights I should give 2F2F 2 stars — it would even provide the opportunity for some kind of gag connected to its title. But, no. I don’t know if it just caught me in the right mood or if it has something surprising under the hood, but I wound up rather enjoying it. It’s junk food, but sometimes that hits the spot.