I watched La Règle du jeu a year ago today, possibly the longest time I’ve ever waited before posting a review. I actually wrote this months and months ago, but sort of intended to re-watch it (especially as it’s been on Film4 plenty) to try to craft something better. But I still haven’t, and with a whole 12 months gone by — and plenty of new films needing to be watched — I’ve decided just to post this and be done with.

And it’s halfway through April and there’s still three more reviews from last year to post, never mind the nearly-40 from this year. 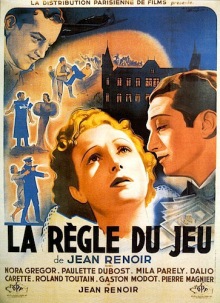 Sometimes you watch one of the most acclaimed films of all time and find yourself with very little to say about it. La Règle du jeu — or, as it’s commonly known in America thanks to Criterion’s incessant title translation (in fairness, that’s probably the most sensible way to combat the mass attitude of “argh! it’s in Foreign!”), The Rules of the Game* — is certainly one of those films. Regularly voted into the top three on Greatest Films Ever Made lists, it sits at exactly #3 on the last iterations of both They Shoot Pictures, Don’t They?’s 1000 Greatest Films and Sight & Sound‘s decennial Top 10 (one of only two films to have appeared in all six to date; the new one’s later this year).

“RULES OF THE GAME, the mutant, French cousin of DOWNTON ABBEY”
– Patton Oswalt

What little I can say is that it’s a farce, but also a drama, which clearly has Something To Say — I believe I read that Renoir said it’s intended to be more about the lifestyle and the time it’s set than it is about a story. That kind of idea can often lead to pretension, but here it works. The story is simple yet complicated — it’s all about people having various affairs, basically, but there’s a lot of them and they’re constantly shifting. I’m not sure how Proper Film Critics would feel about this link, but I felt a certain affinity for Gosford Park while watching. Either I’m being plebby and there’s nothing substantial there, or that’s something that merits a more considered comparison. There’s some great camerawork — not flashy, not drawing attention to itself, but a lovely use of long takes, fluid movement and deep focus to keep the action flowing seamlessly.

And I agree, it is very good, but unlike Citizen Kane (which I instantly admired, though really need to see again to shake off the shackles of its Importance and just appreciate by itself — hello, Blu-ray!), I didn’t really see why it’s often rated so highly. I imagine there’s something I’m missing; possibly some historical significance. 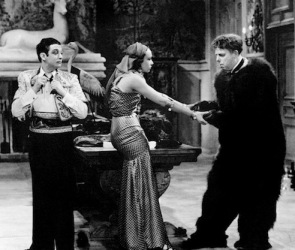 There’s a lot packed in, and I can see how multiple viewings could reveal even more going on. Perhaps a better researched awareness of the period (beyond the obvious Eve Of War, though that’s important) and of French class structure at the time is necessary to get the full richness of Renoir’s vision. The fact it was banned by the French government due to being bad for morale, then also banned by the occupying Nazis, suggests it did have a lot of social relevance.

Not one of my favourites, then, but a definite “must try again”.

* OK, this ‘criticism’ doesn’t stand-up to much scrutiny — it’s not like every UK DVD/Blu-ray release of a foreign film has the original language title on it. But I was inspired by the fact the BFI DVD does call La Règle du jeu by its original title, and numerous other foreign films retain their original titles on UK releases too, whereas you rarely see a Criterion release without a translated title. I also appreciate there’s some kind of cultural snobbery involved in this comment even coming to mind. For these reasons I was going to delete the comment, only I liked part of it too much. So much for kill your babies.