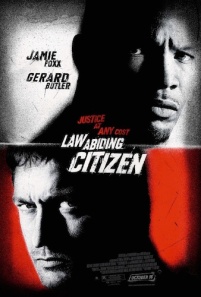 Law Abiding Citizen is a revenge movie with a (slight) difference: wronged man Gerard Butler isn’t just going after the two criminals who invaded his home and murdered his wife and daughter — he’s going after the legal system that let one of the men walk free.

As I say, the film begins in the home of Butler’s character, an apparently quiet family man of unclear occupation (you won’t notice this first time round — why would they clarify his occupation? what would it matter? — but it does become significant later) with a wife and a young daughter. Two men break in to rob them. One is uncertain, wants to be done and gone; the other is more aggressive — he ties them up, he attempts to rape the wife, and, ultimately (and off screen) murders the wife and daughter and leaves Butler for dead.

Months later, attorney Jamie Foxx strikes a deal: one of the attackers will get a reduced sentence for informing on the other, guaranteeing him the death penalty. Butler objects but Foxx is having none of it — the deal will be done. And then we learn that it’s the objector who’ll be getting the death penalty, while the actual murderer gets the reduced sentence. Foxx goes home, to his pregnant wife, fairly sure he did the right thing.

Ten years later… Foxx’s kid is now a similar age to Butler’s when she died. He still does the same job, by the same rules.

He attends the execution of the aforementioned criminal, but something goes wrong — instead of going to sleep with a lethal injection, the attacker suffers an agonising and horrific death. Someone must have swapped the chemicals. The prosecutors’ thoughts leap to the other criminal, but I’m sure we’ve all guessed who’s really behind this. And so Butler’s sprawling revenge mission begins…

Normally I don’t spend three paragraphs outlining the plot of a movie — heck, normally I don’t grant it one (plot descriptions are easy to come by these days) — but I think the setup for Law Abiding Citizen is what makes it more interesting than your regular revenge movie. Despite it looking like a simplistic action movie, we’re actually presented with a situation where there are no clear-cut heroes and villains. Butler is wronged, he wants the killers of his family to suffer — normally, this vigilante is the hero. But did the accomplice deserve such agony? And what of the legal system he sets his sights on next, murdering lawyers and judges and the like. He’s a terrorist, normally the villain. Similar goes for Foxx — he’s the attorney, the good guy, he locks up criminals… but he’s part of a corrupt system that let a guilty man go more or less free with no thought for the truth or just punishment. So he’s not exactly a clean-cut hero either.

On the issue of who the film thinks is good and who it thinks is bad, Empire’s review asserts that “Death Wish vigilantism goes too far when you no longer grasp who you are supposed to be rooting for.” But isn’t that part of the point? Oh, wait, she’s headed me off on this one: “One might argue for the defence that this is meant to be provocatively subversive, with the ‘good guys’ becoming indistinguishable from the bad. The jury doesn’t buy it.” Well, I buy it. Both the lead characters are supposedly the good guys, but both do bad things to one degree or another. The film challenges us about who to side with. Sure, some viewers will come down hard one way… but some viewers will come down hard the other. Plenty of the rest will be left somewhere in between, sympathising with the wronged man but abhorring the extremes to which he goes. And what of Foxx at the end, who on the one hand has learnt his lesson (or says he has), but on the other resorts to the same kind of violent tactics employed by his opponent. Is he in the right now? Well, I suppose he did approve of the death penalty all along. Tsk, Americans.

There is action and violence in the film, and I’m sure that appeals to some viewers, but it’s not wholly central and not distracting from the other offerings: both the debatable morals mentioned above, and the mystery of how Butler is affecting his campaign of vengeance from within a maximum-security prison. This is where his previously-unmentioned prior occupation becomes relevant, but I won’t go that deep into the plot here. Some find the final act, where this is ultimately revealed and explained, to be a ludicrous step too far. 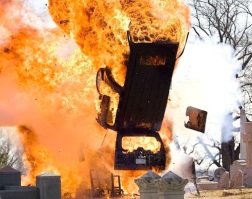 It is a little far-fetched, granted, but it’s not so outside the rules the film sets up for itself that I find it unacceptable.

As for the violence, it can be a little extreme, but mostly it isn’t. One sequence threatens to be the definition of torture porn, but other than a verbal description we’re spared the majority of the gory details. The Director’s Cut runs about 10 minutes longer than the theatrical, and yes includes a smidgen more gore (though a graphic shot of a disembodied, mutilated head might be considered more than a smidgen), but seems to be largely made up of short character scenes and insignificant extensions to a variety of sequences. The film was cut to get an R in the US after being awarded an NC-17; this is officially released unrated, but I think we know what that means. (Both are 18 in the UK.)

Law Abiding Citizen seems to be far more popular with audiences than critics: on Rotten Tomatoes the critic score is a measly 25%, but the reader score is 77%; on IMDb it ranks 7.2; and on LOVEFiLM it has a solid four stars (and they allow half-stars). I must be more of a viewer than a critic, then, because I liked it. It is distasteful in a way, but, like its lead character, it has a point to make in a bold and attention-grabbing manner. Sure, you could make a more intelligent movie debating these points in a reasonable fashion, but you’re not going to interest the same audience — again, the same strategy employed by Butler’s character.

As an action-thriller that actually has something to think about wrapped up in it, I considered being a bit lenient in my score (much as I was to The Condemned). It’s let down by a few things though — its own far-fetchedness, especially toward the end, plus being generally overblown — so I’ve eventually gone on the lower end. Maybe I should start using half-stars after all…