The Girl Who Kicked the Hornets’ Nest — or, in America, Hornet’s Nest (oh, Americans!) — or, translated from the original Swedish, The Pipe Dream That Was Blown Up — or, according to a different translation, The Air Castle That Was Blown Up (guess that’s a cultural thing…) — is the third and final part of Stieg Larsson’s Millennium trilogy.

I say “final” — Larsson planned on writing a total of five to ten books (depending on which source you listen to), so the trilogy he completed is only a fraction of his plans. Despite that, this film seems to wrap up every dangling plot thread from the preceding instalments and round everything off neatly. Whether they’ve done this by creating endings not in the book or excising subplots I don’t know — I’ve not read any of the books — or maybe Larsson just didn’t leave anything else hanging. Whichever it is, as a film Hornets’ Nest provides a suitable ending. Thank goodness for that.

To succinctly compare this to its predecessors, it’s better than The Girl Who Played with Fire but not really as good as The Girl with the Dragon Tattoo. This is in part because there’s not as much detail of the investigation. Lots of the plot seems to be forwarded by people explaining it to each other, rather than genuinely digging and uncovering information, 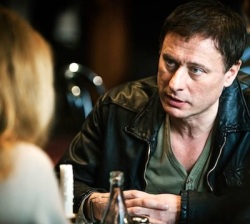 while the villains futilely attempt to stop the heroes publishing everything they already seem to know.

The story centres around a decades-old conspiracy to do with a secret police force and a Russian defector. Writing that, it sounds slightly more exciting than it plays in the film, where it feels much more grounded despite its inherent improbabilities. The conspiracy element works better here than in Played with Fire, leaving that whole film as little more than overlong setup for this one. Unfortunately the conspiracy also seems surprisingly easy to unravel once the heroes pick up the right thread. While that makes for lots of lovely victories, it means much of the film is driven by the villains simply trying to threaten the heroes into not revealing the truth. The mystery isn’t as fulfilling as that of Dragon Tattoo, or indeed many of the other entries in the recent wave of Scandinavian crime we’ve been treated to, such as The Killing or the Krister Henriksson–starring Wallanders.

Perhaps the investigation works better in the novel? Perhaps the actual specifics of it have been stripped out of the screenplay to keep the drama, action and focus on Lisbeth’s trial (of which more in a moment)? There’s a lot going on across various plots and subplots, maybe so much that some threads wind up underdeveloped in this adaptation. I’ll have to read the novels to find out.

The other cornerstone of the film is Lisbeth’s trial for the attempted murder of her father at the end of Played with Fire. The final third of the film is dominated by a series of immensely satisfying courtroom scenes in which the defence trounce the opposition, not through American-esque grandstanding but through a quiet and thorough application of facts and truth. You can see the satisfaction bubbling under Lisbeth’s almost-static face as the prosecution unknowingly hang themselves, the defence — Mikael Blomkvist’s sister Annika, for what it’s worth — holding back her killer evidence until the prosecution have dug themselves a pit so deep even this mixed metaphor would be buried. Both Lisbeth and Annika walk all over them by remaining calm and logical, dispatching the case against Lisbeth in a way that becomes an absolute joy for the viewer.

Some have complained that Lisbeth, and consequently Noomi Rapace, aren’t given enough to do in this film. On the surface they seem right: she spends most of the film sat quietly in a hospital bed, followed by more time sat quietly in a prison cell; it’s only during the trial scenes she has much dialogue, and even then she spends a lot of it quiet. But I think to say she’s underused would be to do the writing and, particularly, Rapace’s acting a disservice. Lisbeth’s actions are not as dynamic as her activity in the preceding films, certainly, but that means the quality of Rapace’s performance can shine through. She does a lot with her few lines of dialogue, and even more with silent reaction shots.

It means Lisbeth remains an unknowable, elusive mystery, but then isn’t that part of what makes her so fascinating? The full exposure of her troubled (to say the least) history in this episode clears up some of her ambiguity without lessening her as a character. It’s a testament to the understated excellence of the performance that actions as little as a smile or saying “thank you” are huge revelations.

The film ends with an extended epilogue, where a freed Lisbeth deals with her brother. This is from the novel (that I checked), but sadly it feels tacked on. It was an element that needed resolving, but as her brother had spend the whole film pottering around doing sod all it was a needless one. It would have been better if he’d been off killed in the second film, rather than lingering over this one for no reason, ending the film on the victory of the trial — the actual end of the story. While I remain unconvinced about the US adaptation changing the ending of Dragon Tattoo (we’ll see how that goes), this is one modification that I think the inevitable re-adaptation of the two sequels should definitely make.

It seemed to me that Larsson’s Millennium trilogy is like so many recent film trilogies — Pirates of the Caribbean, say, or The Matrix — where a successful standalone first tale leads to an inferior two-part ‘epic’ follow-up. Despite being a relatively understated thriller, I think the ‘secret police’ conspiracy plot counts as epic in its own way, and the two sequels certainly form two parts: the first leaves most of its story unresolved, 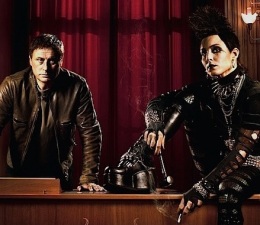 the second balances on top of the events in its predecessor. The difference is, I properly enjoyed Hornets’ Nest. I wouldn’t watch it again in isolation (unlike Dragon Tattoo, which doesn’t need its two sequels to function as a story), and perhaps it had too much going on for its own good — or perhaps I’m being too demanding of the intricacies of the investigation — but it’s a solid final episode with a lot of satisfying moments.

The Girl Who Kicked the Hornets’ Nest is out on DVD and Blu-ray in the UK tomorrow.