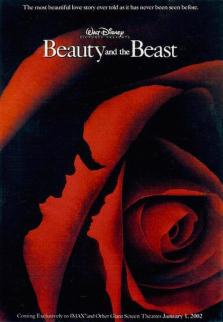 Do you need me to tell you how great Beauty and the Beast is? I imagine not. If you’ve seen it, you’ll know. If you haven’t, you really should, and then you’ll know.

There’s a reason this managed to become the first animated film ever to be nominated for the Best Picture Oscar. It’s impossible to fault in any significant way. The design and animation are beautiful (in particular the stained-glass opening), the voice acting spot-on, the score exquisite, the story fast-paced and enthralling, there’s even a variety of moral messages for the kids to learn — though, to be honest, some adults could do with learning them too. It’s hilariously funny, remarkably exciting, surprisingly scary, relentlessly romantic… By forefronting the love story it may not be as obviously boy-friendly as Aladdin or The Lion King, but between Gaston, the wolves, Lumiere, Chip, and the action-packed finale, there’s plenty for less romantically-inclined little’uns to enjoy.

As a musical, it’s equally faultless. Every song is a gold-standard Disney tune — Belle (the opening song), Be Our Guest, Gaston, The Mob Song (as the villagers set off to kill the Beast), and of course Beauty and the Beast itself. There are few musicals of any calibre where I feel able to say there’s not a single dull or mediocre song to be found, but Beauty and the Beast is certainly one of them. Every number bursts with memorable tunes, witty rhymes, genuine emotion — even the Soppy Girly Song is a good one! Perhaps the only exception in this Special Edition’s sole extension, a previously-deleted song called Human Again.

It’s not a bad song — not at all — but it’s a notch below the others. (There are a few more changes to the film than just adding the song, listed here.)

You may have heard that a 3D version now exists too, released in some territories earlier this year with a US cinema and Blu-ray 3D release scheduled for 2011. Aside from the usual issues around post-production 3Disation, how well can a 2D-animated film convert to the format? Surely it looks even more like flat layers stacked on top of each other than other fake-3D efforts? I’m curious, though probably not enough to seek it out if it makes it as far as UK cinemas.

Some of “Disney’s Animated Classics” (do they still call them that? I don’t know) stretch the definition to its breaking point — indeed, some of them do break it. But Beauty and the Beast more than lives up to the name. In fact, it could easily drop the “Disney’s”. And the “Animated”. It’s a pure Classics. Erm, Classic.