Post Inception, it feels like we should be seeing a revival of interest in all things Total Recall, concerned as it is with dreams, fake memories, and what’s real and what isn’t. On the other hand, aside from an ambiguity about whether the lead character is dreaming or not — which adds texture but, arguably, is unimportant to the film’s primary thrills — there’s not that much to read into it.

For me, the joy of Total Recall is in discovering another ’80s blockbuster (ignore the fact it was released in 1990), the kind of thing I grew up watching on rented videos and BBC One Bank Holiday schedules; films like the Indiana Joneses, Back to the Future, Ghostbusters, Burton’s Batman, and all the rest (I feel I’ve used these examples before; I must have some others), whose practical effects and general style and tone — not a conscious effort by these filmmakers, I’m sure, but instead just How Hollywood Films Were Then — vividly recalls that era for me; films that at the time were, to my young eyes and understanding, enduring classics of cinema that had always existed… despite the fact most were just a few years old.

I suspect it’s for this reason that my top note on Total Recall is “fantastic effects”. But, still, they are; from the wide shots of a Martian landscape and its complex of buildings, to the mutants, disguises, and blood ‘n’ gore. That it all becomes slightly cartoony — albeit the nastiest, gruesomest cartoon (apart from, y’know, some of That Japanese Stuff) — just adds to the charm. Similarly, a lot of the ‘science’ is utterly implausible or impossible — which,

depending on your point of view, either supports the “it was all a dream” reading or is just a case of artistic licence, hardly uncommon in SF cinema.

Also very much ‘of the era’ is the star, Arnold Schwarzenegger (as if you needed telling). He really isn’t cut out for any role more demanding than the Terminator, though his laboured delivery and awkward presence injects a certain amateurish, humorous charm to any scene he’s in — ergo, much of the film. Conversely, Michael Ironside makes an excellent villain. Though his death is suitably dramatic, it’s a shame he’s not The Big Bad Guy — the film follows the blockbuster rule of dispatching villains in order of importance well enough, but Ronny Cox doesn’t come close to the commanding presence required to create a memorable villain in such little screen time. It leaves the viewer longing for Ironside to be featured during the final climax instead of Cox’s limp boss.

I suppose Total Recall endures in that way successful films do, because they provide a point of shared cultural awareness. I feel its influence has diminished with time — this is entirely subjective, but it doesn’t seem to come up as much as it used to — and presumably will continue to do so, as its not-unjustified absence from Best Of lists means fewer new viewers come to it and so its cultural cachet diminishes. 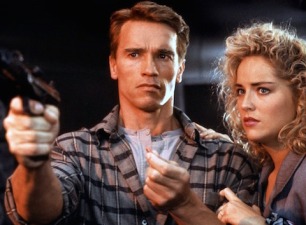 Perhaps it’s ultimately destined for an afterlife as a film representative of its era; the kind of thing that comes up as a footnote or personal favourite in texts & documentaries specifically discussing things like The Sci-fi Cinema of the ’90s. Or perhaps I’m doing it a disservice. We shouldn’t really try to predict these things too much, it’ll only lead to embarrassment when the opposite happens.

So, Total Recall. Good fun. Quite funny. Bit gory. I liked the effects.