Back when he was still directing The Hobbit, Guillermo del Toro spoke a bit about his plans for Smaug, the dragon antagonist of Tolkien’s tale. Talking about the lack of “landmark” designs for dragons, there was one he did single out (I’ll give you one guess which it was)…

One of the best and one of the strongest landmarks that almost nobody can overcome is Dragonslayer. The design of the Vermithrax Pejorative is perhaps one of the most perfect creature designs ever made.

Indeed, the realisation of the spellcheck-bothering dragon is definitely one of the film’s high points. It’s an impressive creation, brought to the screen in those wonderful pre-CGI days through a total of 16 puppets, which included a 40-foot hydraulic model and the first use of “go-motion”, a computerised version of stop-motion designed to add motion blur. Of course it has that veneer of ’80s effects work, which is either nostalgic or amateurish depending on your point of view (and, most likely, age). Some of it looks expectedly dated — it’s nearly 30 years old after all, and hasn’t benefitted from the attention lavished on the likes of Star Wars (even discounting all the CGI Lucas has pumped into that) — but largely it remains effective. 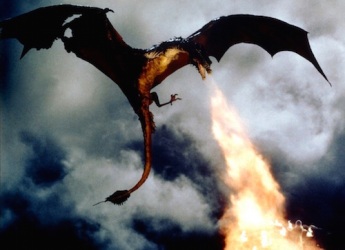 Vermithrax Pejorative is a long time coming, however, wisely kept off screen by director Matthew Robbins. It’s not that the monster shouldn’t be revealed, just that, like Alien, it carries more power when glimpsed in parts and flashes, and the wait to see it builds the tension. It’s worth the wait, and it’s not as if the rest of the film is worthless.

Aesthetically, it’s got that nicely dirty, realistic feel to its depiction of the Dark Ages, which has been rather lost as swisher filming techniques have come along to make everything oh-so-stylised, particularly in genres like fantasy. The rough, practical effects add to this feel, in a way CGI is unlikely to do (not that it couldn’t, I’m sure, but it would have to be exceptionally well managed and I can’t think of an example).

A very young-looking Peter MacNicol leads the cast, being sporadically (shall we say, kindly) fresh. He’s been better served in character roles since. According to IMDb he’s embarrassed by the film and doesn’t include it on his CV. Particularly when one considers the kind of work he does now, it’s quite easy to see why. Being a US-produced medieval-ish fantasy film, everyone is English — except the two leads, of course. They’re all fine but, like every high-concept fantasy blockbuster, this is more about the adventuresome hijinks 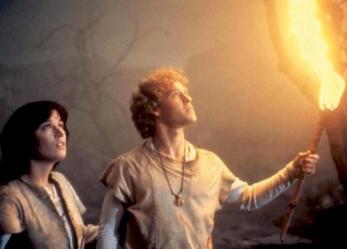 and giant monster than character development. Similarly, an interesting subplot about the move from The Old Ways of magic and superstition to The New Ways of Christianity feels like a good idea that hasn’t been fully integrated, made up of little more than a couple of passing nods and a negatively-inclined inclusion in the coda.

Dragonslayer is a little scrappy, in a way — the narrative, the acting, the effects — and yet, for that, it’s a minor treat. I don’t know what The Youth Of Today would think of it, but as someone who in his childhood watched many examples of this kind of film on video from the small rental place in town — films like The Princess Bride, The NeverEnding Story; you could even include big-hitters like the Star Warses or Ghostbusters — it fits nostalgically into that era. And there’s a lot to be said for nostalgia.