“Oh my God, what have they done to Sherlock Holmes?!” Etc etc. By this point you’re likely to have heard the arguments that Guy Ritchie’s blockbuster re-imagining of the Great Detective is actually based on all sorts of references and allusions in Sir Arthur Conan Doyle’s original works, so I won’t go over them again here. Indeed, I’m not even convinced they’re relevant in the first place.

You see, it’s true — Ritchie and co have turned grumpy old romance-free Holmes into a comedic action hero with a love interest. But he still has the brilliant mind, he still has a mystery to solve, and that love interest is Irene Adler, “the one that got away” from one of Conan Doyle’s earliest Holmes tales. Perhaps this isn’t such an unfaithful Holmes after all.

And actually, the mysteries Holmes solves make some of the film’s most interesting bits. Numerous murders and impossible escapes make up the narrative, slipping by almost unnoticed in the main plot; but, come the climax, in true detective story fashion Holmes has an explanation for how every one was done. There’s the equivalent of Poirot gathering all the suspects together to explain it to them, only in Ritchie’s blockbusterised version of a classic detective story this takes place atop a half-built Tower Bridge with the villain dangling precariously over his doom. 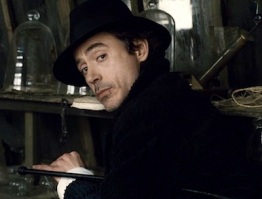 The way to this climax offers a good mix of detecting, action and humour. It’s not pure Holmes then, but it’s not pure blockbuster either. Downey Jr brings some of his Tony Stark magic, but his take on Holmes is still distinct, not just because of his faultless English accent. His madness, obsession and genius are all well portrayed, and Ritchie’s direction matches it beautifully.

Some of the early scenes make for the most perfect evocation of Holmes I’ve seen on screen, such as when he’s in a restaurant and the sheer volume of noise becomes too much, thankfully broken when his guests arrive; or the fight sequences, where we listen as he meticulously plans every last move in super-slow-mo — all shot for real in-camera, incidentally — before executing them in a matter of seconds. The Matrix-esque slow-mo punches and what have you may have looked derivative in the trailer, but in context they’re bang on.

Though this is Downey Jr’s film, most of the cast are up to the task. Even Jude Law, who I’m no fan of, makes for a decent sidekick of a Watson, his shoot-first characterisation contrasting with Holmes’ thoughtful care better than the regular question-asking audience-cypher. 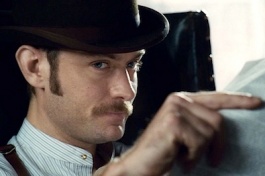 Mark Strong’s villain is suitably chilling, aided by the film’s irreverence: if they can make Holmes into a quip-dealing action man, maybe there really is something supernatural at work? To reveal the truth would spoil that proper climax. The closest to a weak link is Rachel McAdams’ Irene Adler. I like McAdams well enough generally, and here too, but she may still be a little out of her depth — they’ve gone for a Pretty Young Thing when someone a little older may’ve suited better.

The closing moments set up a sequel in the most blatant way possible — if Batman Begins‘s Joker card is a brief, subtle indication, Sherlock Holmes‘s equivalent would be to have Batman and Gordon debating who this Joker feller might be and what he might want for a couple of minutes. It’s a bit too much, if you ask me, particularly as the Joker in question (oh, you all know who it is) isn’t actually seen — rumours of a famous cameo prove to be false.

And so what we find with this new Sherlock Holmes is an entertaining blockbuster, but with enough ‘proper Holmes’ laced underneath to make it feel different, unique even.

Ritchie brings something special to the director’s chair too, believe it or not — you may think he’s sold out into blockbusterdom to revive his flagging and repetitive career, but the touches he brings suggest the mind of someone who has control of his material, his camera and his edit, and wants to use them all to try something a bit different, not just another hack-for-hire who could churn out any old template-hewn action/adventure flick.

Perhaps it’s a little long in places. That might be my only complaint. And yet, for that, I’m certainly looking forward to Sherlock Holmes 2.

Sherlock Holmes placed 8th on my list of The Ten Best Films I Saw For the First Time in 2010, which can be read in full here.