It’s generally taken as a rule that an original film is better than the remake, particularly so if that original is in a language other than English and the remake is American. But there’ll always be something to buck the trend, and in my view that’s Insomnia.

Watching this Norwegian original after having seen Christopher Nolan’s American version, it feels like someone watched the remake then was asked to retell it: it hits most of the main plot beats and memorable sequences, but seems to gloss past the nuances and character. On the bright side (perhaps) this makes it more efficient in its storytelling than the Hillary Seitz-penned US version. And about 20 minutes shorter.

Conversely, one might argue it’s subtler. Less time is spent directly delving into the characters, especially Jon Holt (Robin Williams in the remake), but there’s still stuff there to extrapolate from. Nolan’s version, on the other hand, makes it more explicit, including scenes and sequences that actually develop and reveal characters rather than leaving it purely as something that may be inferred if the viewer wishes.

The titular condition suffered by Stellen Skarsgard’s detective (Al Pacino in the remake) feels more present here. The remake lifted some elements of it, but I remember being 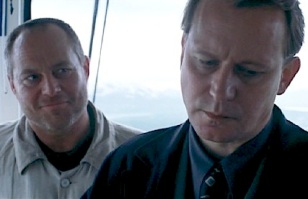 surprised how little his lack of sleep had to do with anything. Here, there are several scenes of Skarsgard struggling to sleep, he’s visibly rougher as the film progresses, and it seems to impact his judgement and sense of what’s going on more than in Nolan’s film. If the other character elements are apparently less developed, this is something the original does better.

I’ve given both versions the same score; perhaps generously, because I think the remake comes out of things better. The original undoubtedly has that European indie aesthetic (not to mention subtitles, and that it’s The Original) that will always endear it more to some. As a remarkably faithful remake, the US version clearly owes this a lot, but the depth of character and more overt complexity of morals added by Nolan and Seitz gives it the edge for me.