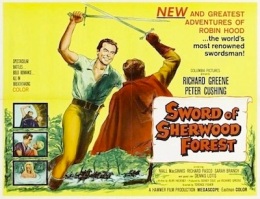 Hammer didn’t just make horror movies, y’know. I’m sure many film fans know this, but the phrase “Hammer Horror” is so ubiquitous that I expect most people think that was the company’s name and all they produced.

This Robin Hood adventure is one of theirs, though. Effectively a spin-off from the immensely popular The Adventures of Robin Hood TV series (1955-1960), though only Richard Greene as Robin carries over, it’s clearly from a simpler age, when films could still rely on a bit of derring do and a middling plot (nowadays they just rely on a bit of CGI and a middling plot).

After the ‘origin story’ becoming the default setting for new versions of well-known heroes in the past few years, it’s quite nice to witness a tale that dives in assuming we know who Robin Hood, Little John, the Sheriff, and so forth, are. Only Marian is introduced as someone new to Robin, though the speed of their romance suggests someone perhaps forgot they’d only just met. This allows the film to get on with its plot, such as it is — a bit of an excuse for an array of action and humour, mainly.

It doesn’t all tie together fully. For example, one assumes the town of Bortrey was going to be the site of Newark’s castle, as that’s the only apparent reason why he’d be annoyed at the Archbishop for stopping the Sheriff acquiring it. But then Bortrey is burnt down, and with little reaction or comment from any character. And the opening plot point — a man escaping the Sheriff with a mysterious symbol — is never fully explained. Was he a co-conspirator? Was he aiming to warn the Archbishop? If the latter, where did he get the symbol? Maybe I missed a scene that explained all this.

The story manages one surprise at least, when Peter Cushing’s Sheriff is killed, and before the climactic battle, and by a fellow villain, and only a lowly henchman-type at that (albeit one played by a pre-fame Oliver Reed). Although it’s rather a good twist in some ways, when you look at the other narrative choices of screenwriter Alan Hackney one wonders if he realised it was one.

The cast are adequate, even if Richard Greene’s no Errol Flynn and Peter Cushing’s no Alan Rickman (here at least). Terence Fisher’s direction is rather flat a lot of the time, though a few scenery shots, riding sequences and fights bring out a bit more dynamism.

Ultimately, Sword of Sherwood Forest is a bit middle of the road. It has its moments, but there’s a reason it’s not widely remembered as a classic Robin Hood film — that being, it isn’t one.