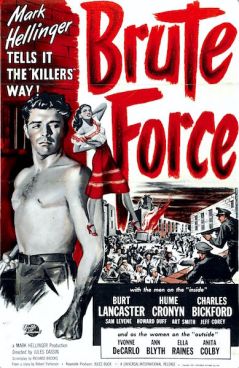 Jules Dassin’s prison-set noir concerns a group of inmates trying to escape from the cruel regime of a vicious warden, allowed free reign by an ineffectual governor and target-driven bureaucrats (nothing changes, eh?)

Tonally, it’s varied. Early on it’s quite humourous, with a weak warden, jaunty calypso-singing inmate (who occasionally threatens to tip the whole thing over into a musical) and amusingly drunk doctor. Then there are the flashbacks to the outside world, laden with undercooked romance and awkward dialogue. In the final act it turns decidedly grim: warden Munsey lives up to his lowly reputation, goading one prisoner to suicide and beating another close to death, while the other wardens listen on from outside; one of the good guys betrays his mates, ultimately leading to wholesale slaughter as the escape plan goes awry. A balanced, varied tone is not necessarily a problem, but the flashbacks are almost uniformly unwelcome asides and, by separating the distinctly comical from the resolutely grim by placing them firmly at either end of the film, they don’t quite gel as a whole.

Still, the climactic prison break — including the build-up — is a brilliant extended sequence. Tense, epic and exciting, it concludes with a fantastic action sequence. It also delivers a powerful moral message, underlined by its direct delivery from a prison staff member rather than an inmate. It goes some way to make up for the earlier flaws, like the dialogue that’s occasionally typical of the period’s worst — “I’m just a guy who… explained his entire backstory in one slightly long and unwieldy sentence to someone who already knew it”.

What gets forgotten in all this, perhaps most depressingly, is the fate of those on the outside. We’re told early on that Collins’ love is refusing treatment for her cancer until she sees him again. This seems ready-made to provide justification for a prisoner to escape; indeed, the whole film is skewed this way, as we never discover many of the inmates’ crimes, and those we do hear are either done for good reason or not that bad. But it toes the more obvious moral line by having no one escape, and while the cancer isn’t mentioned again after the slaughter, it leaves what might otherwise seem a morally justifiable cheat (the prisoners are the good guys here — we expect and want them to triumph — but that they don’t is ‘correct’) with a bitter taste.