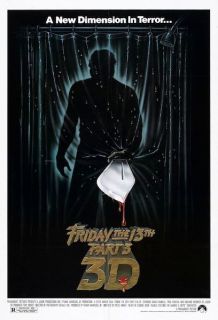 Oh, forget it — I can’t get excited about that. I’ve never even seen a Friday the 13th film, and had no intention to ’til Channel 4 showed this in 3D. Fortunately, general cultural awareness of who Jason is and what he does is all that’s required to understand this third entry in the never-ending franchise.

It’s pretty much your stereotypical horror movie: a group of teenagers just waiting to be slaughtered, a remote cabin-like location, lots of jump scares over nothing, a supernaturally-powered killer stalking them for no apparent reason, lots of gory deaths which have more thought put into them than the plot, characters and dialogue put together… The acting’s all at the level of a high school play, which probably does a disservice to most high school plays. There’s no point wondering who’ll die, because inevitably they almost all will. All this considered, it’s a passably entertaining genre entry.

The good bit here, however, is the 3D. They have a whale of a time shoving stuff out into the audience for almost no reason — just like the stereotype of 3D films, of course. That’s part of the fun of trashy 3D movies so I’m not criticising it, but what sadly doesn’t work is the ColorCode 3D system chosen by C4. It provides lovely depth to normal scenes, but as soon as something’s attempting to come out at you it fails. It could be the age of the film producing flaws in the process as newer things shown during 3D Week have been better, but most do come a cropper as soon as something attempts to come out of the TV as opposed to go deeper into it. Oh well.

Friday the 13th Part III is what it is, and if that’s what you’re after that’s fine. At least the 3D silliness adds an extra dimension of enjoyment. Pun very much intended.