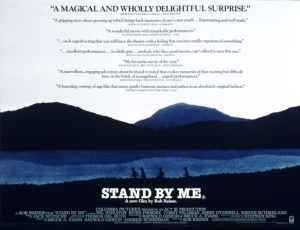 Stand By Me is a film an awful lot of people love an awful lot, which it always seemed to me was down to first seeing it at the right age (more or less the age of the main characters, I think) and possibly to being part of a certain generation — would it have the same effect for kids today, when the relative innocence and freedom of the ’50s is arguably lost? As I say, “seemed”, because now I’m not sure either of these factors really matter.

Irrespective of age, generation, or being able to remember the kinds of experiences suggested by the film, Stand By Me is still an effective and affecting little film. The level of enjoyment for some may depend on how much they can stomach child actors, though as kids go they’re mostly very good. River Phoenix in particular is brilliant, highly natural while bringing a lot of depth to perhaps the most important role. Wil Wheaton also makes a good account of himself, just one year before attracting derision as Wesley Crusher in Star Trek: The Next Generation. (Phoenix, of course, went on to have a tragically short-lived career.) Kiefer Sutherland is as effective a villain as he ever would be, though that aspect of the plot is almost an aside.

An aside, because the film isn’t about the fights between the young heroes and a group of older bullies. Rather, it’s a paean for childhood, with the adult perspective and the ‘lost age’ setting of the ’50s succinctly highlighting the nostalgic spirit. To be precise, it’s not so much reflecting on “childhood” as on “growing up” — the choices that are open when young that either disappear with time or, for whatever reason, become closed off. The whole film is arguably about choice: choice of friends, choice of social class, Ace’s constant listing of choices (the subtext breaking into the text, as many a film teacher would point out), even the obvious choice whether to follow the tracks or take shortcuts (surely symbolic). Thematically, it’s the choice to be put down or stand up for yourself; the choice to stick around and wind up a nobody or work hard and get out, also underlined in the present-day bookends.

Perhaps being the right age is helpful to a love for Stand By Me, but at any stage in life it’s easy to relate to its depiction of the experiences and choices of childhood, be they now lost, taken, or never even had.