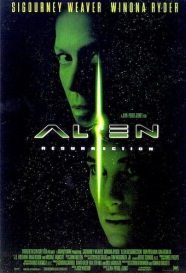 Alien Resurrection is much maligned, to the point that even screenwriter Joss Whedon has publicly disowned it. Which is interesting to me, because I really liked it.

While you clean up your beverage-of-choice that I’m sure you just spurted all over your monitor, let me reassure you that I’m not about to argue Resurrection is an undervalued classic on a par with the first two films; but, having heard nothing but bad things about it for over a decade, I found myself pleasantly surprised. As so many other reviews have sought to detail the film’s flaws I won’t dwell on them myself, but instead seek to explain why I liked it.

In my Alien³ review I applauded the franchise for taking each instalment in a new direction stylistically, and Resurrection doesn’t drop the baton on this. Structurally it’s the most straightforward of all four, slotting fairly neatly into a standard action-adventure/disaster movie template — especially once Ripley hooks up with the crew of the Betty — but this isn’t the most notable difference. No, that would be twofold: its black humour, where the tastes of both Whedon and director Jeunet make their mark; and how grotesque it is — almost two extremes walking hand-in-hand. The deformed, perverted Ripley clones; the Hybrid; the Ripley-Alien sex scene — there’s nothing like this in the other films, and that’s a grand thing. Even if you disapprove of most (or all) of that, the scene where two aliens kill a third so that its acid blood will burn through the floor, allowing them to escape, is a bit of genius that takes our existing knowledge about the species and does something gloriously new with it.

The Aliens themselves are very well realised. For fans who favour the first film to all others they undoubtedly spend too long in plain sight, but, while there is certainly some poor CGI (the underwater sequence being of particular note, though you can see how it seemed a good idea), the constantly slime-dripping practical creatures are excellent. The Aliens and the company (no longer Weyland-Yutani, for no good reason) are relatively revealed by the story too, which I’m sure is to its detriment for some. Personally, I considered it another sensible change: we’ve had three films of the company attempting to capture the Alien — what would happen when they succeeded? That the plot is still based around the company’s hunt for the Aliens (as significant chunks of the previous sequels were too) is also interesting — essentially, the whole franchise was launched because at some point during the first film someone decided Ash should be an android who wanted to capture this mysterious creature.

I can well imagine many hated all these additions and changes to the series’ mythology (especially the Hybrid — fans always hate things like that), but I found them to be an interesting attempt to further the franchise’s story rather than just rehash previous instalments. I won’t deny that some of it borders on the silly (or even crosses that line) and there are a few plot holes (which is disappointing, because many could have been explained away if someone had taken a bit of effort), but for the most part it’s fantastically creepy, grotesque, and more than a little weird… and all within the confines of a standard action-adventure plot! Plus, within that it also retains an unpredictability over who will die, something Alien³ managed to fudge. (That said, the top four names in the opening credits are the four survivors, so maybe I should just pay more attention.)

Resurrection marries the franchise’s most wonderfully grotesque imagery with a standard action-adventure plot, meaning anyone who comes to this looking for their average sci-fi action-adventure may walk away with their sensibilities shocked — or perhaps mutated beyond recognition. It’s certainly not the series’ best film, but I have a nagging feeling that it might turn into my secret favourite.

Not so secret now I guess.

Alien Resurrection placed 9th on my list of The Ten Best Films I Saw For the First Time in 2009, which can be read in full here.