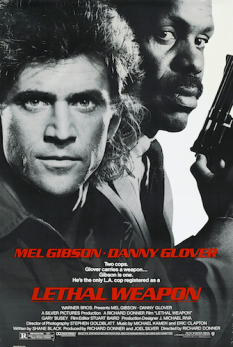 Lethal Weapon comes from another era — an era in which R-rated films were still allowed to be blockbusters. One only needs to look at the classifications attached to the most recent instalments of formerly-R-rated ’80s franchises — primarily, Terminator 3: Rise of the Machines and Die Hard 4.0, both PG-13 — to see how things have changed. Of course, maybe they have just cause: Watchmen, the first proper R-rated blockbuster for a while, has been labelled a box office disappointment (because that’s what $150m worldwide in two weeks is these days).

I digress. Though, my mind frequently wandered during Lethal Weapon — often to Die Hard. This may predate the Bruce Willis franchise by several years, but it’s a testament to the fame of that film’s Christmas setting that my first thought was they’d ripped it off (Lethal Weapon, like Die Hard, begins with a classic Christmas song over an urban setting). And my next thought was, did they not have a costume budget? The film opens with a young girl, lazing provocatively with one tit out… at first, before Donner makes sure to show them both off thoroughly before she hurls herself from a building; and then we find Danny Glover’s Murtaugh in the bath and Mel Gibson’s Riggs wandering around showing his arse off. Nudity is fine in its place, of course, but here it’s so gratuitous that it sets a low tone — to be fair, one the film does little to belie.

More seriously then: the plot is full of holes with great gaps in its logic, especially as it heads towards the climax. There’s also no mystery — the investigation is just an excuse to string together action set pieces and comedic buddy scenes, neither of which are much cop, and most of the story is conveyed in a couple of info-dumps that supporting characters volunteer for no definite reason. The dialogue and performances are appalling — “may I remind you of some stuff you already know, that’s convenient exposition for the audience, thoroughly explaining the troubles of the main character and the scene you just saw”. I’ve seen better episodes of Murder, She Wrote. Their motivation makes about as much sense too — “tell me the truth!” “But they’ll kill my daughter!” “We can protect her!” “No you can’t!” “Tell me!” “Oh OK then.”

The villains aren’t just poorly drawn, they’re barely sketched at all. There’s an early scene where we see how Hard they are, then they just turn up in time for the climax and do little more than get chased around and die explosively, and in the wrong order to boot. At the very end, our heroes capture the one remaining bad guy… and then have a fight. Why? Because they do. And then all the police turn up and just watch this punch-up going on. It’s the thinnest excuse for a final fight ever put on film, and consequently the least tense — none of those officers are going to let the villain kill Riggs, and even if he did beat or kill him he’s not going to escape. There is literally no point to it. It’s appalling writing, and dire filmmaking to have left it in.

Oh, and Murtaugh smashes a car into his own front room for no reason.

Lethal Weapon probably wants to be a lot better than it is. Was it supposed to be a drama about these two cops with any old investigation plot stuck on, or a standard action-thriller with too much time spent on character? At best, it falls somewhere between the two — they’re not real characters (i.e. it wouldn’t pass as a drama if you cut out the thriller), each being made up of several stock Action-Thriller Hero traits; but nor is the plot the main focus, what with it being rather generic and not especially interesting or at all complex. The leads’ repartee and bonding is more interesting than the actual plot, and is surely the explanation for the film’s enduring popularity and three sequels, though to be honest I didn’t get it.

I’d always thought Lethal Weapon must be alright — after all, as I said, it’s had an enduring popularity and was written by Shane Black, who went on to both write and direct the thoroughly wonderful (and underrated) Kiss Kiss Bang Bang (with Robert Downey Jr being fantastic a good few years before his popularity resurgence in Iron Man) — but having seen it, I struggle to see why people like it to any significant degree.