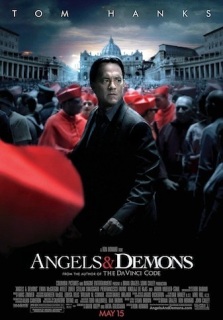 Three years ago, I found myself at a packed midnight first-screening of The Da Vinci Code, the Tom Hanks-starring Ron Howard-directed adaptation of the Dan Brown-written novel that’s probably only second-most-read to The Bible by now. I liked the book — its prose is a long way from great, that’s true, but the storytelling is fantastic, helped in no small part by its undermining of the Christian church so thoroughly and consistently that it can only be described as wish fulfillment (well, it fulfilled my wishes). I liked the film too — again, it’s not great, but it was an entertaining adaptation.

Despite this, I’ve never read another Dan Brown book. Not even Angels & Demons, which also stars Robert Langdon (that’s Hanks’ character, in case you’ve somehow missed this entire phenomenon) but was written first. Rather than being yet another prequel, however, Howard and co. have chosen to make it as a sequel — entirely logical in the past, though these days it almost makes them seem behind trend. In spite of my unfamiliarity with the source, I once again found myself at the film’s first screening here — though it says something about how well The Da Vinci Code was received (i.e. not very) that Angels & Demons made its bow on a damp Thursday afternoon in a barely-attended screening.

It may come as a surprise that Angels & Demons has a subtly different feel to its predecessor. It still concerns itself with Hanks’ Langdon dashing about trying to solve insanely cryptic clues in a limited timeframe, surrounded by irritating policeman, suspicious friendly characters, and a girl who is almost pointless. However, it’s a lot less talky — there are few grand theories to be explained, and while there are still a few exposition-dense monologues they aren’t the focus in the same way. Instead, with just an hour to solve each set of puzzles, our intrepid symbologist hares around Rome, desperately trying to save lives. Unfortunately, the trail he’s following doesn’t seem as well thought out as the previous tale’s mysteries, and the speed at which they must be solved seems designed to gloss over this — there’s no time for the viewer to consider everything Langdon’s telling us, we just have to accept it.

If that wasn’t enough, the film comes with a moderately hefty sci-fi element — yes, really — which makes a huge change tonally. While The Da Vinci Code is patently not based in much truth, both Brown’s novel and the adaptation mixed in enough facts, half-truths and very plausible lies to give it a real-world believability. The abundance of tie-in books and documentaries proving or disproving its theories show that people bought it. There’ll be no such thing here though: from the beginning the use of CERN and the Large Hadron Collider (y’know, the thing that’s going to end the world) and a theoretical bomb adds a science fiction feel, and while it’s really no more than “a very big bomb” for most of the film the damage is already done. To cap it off, the CGI-decked finale — which is further bogged down with feats of logic and physics that require at least a little suspension of disbelief — brings the film more in line with science fiction blockbusters than thriller blockbusters.

All this does nothing for the central villains either. When judged independently, the Illuminati are actually more believable than the Priory of Sion — they’re certainly more based in fact — but they come across as less so because no one’s bothered to construct that web of facts required to sell the half-truths, and in turn to sell the lies. Nonetheless, the film does a good job of hiding the Secret Villain’s identity. Well, sort of. Those not paying any attention may guess it relatively early and turn out to be right; those following it only slightly more closely may be lured astray by a couple of clear red herrings; while those indulging in an intelligent game of guess-the-twist will flip around a bit more as various characters show slight ambitions or potential motivations that suggest they may be the subject of a Shocking Twist. That it eventually comes back round to where you always thought it would is not necessarily a bad thing, but neither is it as surprising as the makers wished we thought.

Howard does his best to ring tension and excitement out of all this, but the problem is fundamentally the screenplay — as with The Da Vinci Code, adapted by an overpaid Akiva Goldsman, this time with David Koepp credited too. Of course, they’re lumbered with Brown’s novel, but that doesn’t excuse some truly clunking dialogue. It’s also their fault that the cast are so underused. Ayelet Zurer has perhaps the most thankless part as Token Female with minimal relation to the plot, though one of the screenplay’s wisest decisions is in modifying her backstory — based on summaries I’ve read, in the novel it’s near identical to that of Sophie’s from Da Vinci Code. (That’s Audrey Tautou’s character. Yes, I’d forgotten her name too.)

Despite being the lead, Tom Hanks has little more to do than look concerned and explain the reasons for all the running around. On the positive side, as silly hairstyles are only allowed if you’re Australian this Summer, at least Langdon’s ludicrous lengthy locks have been lopped off. Few among the rest of the cast fare any better, with Stellan Skarsgard being particularly underused — his primary function seems to be Quite Famous so we’ll consider him a decent contender to be the Secret Villain. The other star name, Ewan McGregor, does the best he can with perhaps the film’s best character — his Irish Camerlengo is more interestingly conflicted than the film deserves or can manage, and as such is underwritten. That said, he’s stuck with an Irish accent that comes and goes and is still lumbered with at least one dire speech. Only Armin Mueller-Stahl emerges with much dignity left, in the medium-sized role of fellow Secret Villain possibility Cardinal Strauss.

In another misstep, Angels & Demons exhibits an overuse of special effects. It may not seem like the sort of film that would need them, but the sci-fi side of things brings plenty of CGI along whenever it rears its head. These include some elements at the climax that may have been literally copy-and-pasted from Watchmen’s graphics department, though to say much more would spoil the sheer lunacy of how the film finishes. Suffice to say, most will absolutely hate it; I almost do, but at the same time almost respect it for being so bonkers. On top of this, that the crew were denied permission to film in many of Rome’s famous locales means there’s an abundance of computer-aided locations. They probably look perfectly real to your average movie goer, but for me they all had that slight indefinable oddness that’s present too often these days — think Quantum of Solace’s Siena chase and bell-tower-to-art-gallery tumble for an example of what I mean.

Angels & Demons makes for an occasionally entertaining run around, though there’s less meat on its bones than The Da Vinci Code, and the comparative lack of believability makes for less fun than its predecessor’s “well, maybe…” plot. Those who disliked the first film may prefer this for being less talky, more pacey, and, perhaps, being aware of its own silliness. Those who actually liked the first film may disagree.

My review of the extended version of Angels & Demons can now be read here.