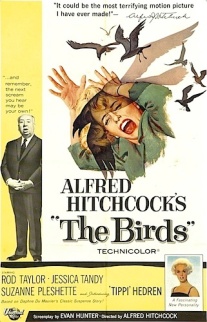 I first saw The Birds on TV so long ago that I can’t even remember how long ago it was. Only two parts of it have stuck with me since: the justly famous scene with the climbing frame (ooh it’s brilliant), and a dead Dan Fawcett with his eyes pecked out (ooh it’s chilling).

If that didn’t give it away (and as if you didn’t already know), The Birds is a horror film. A horror film of the proper kind too — the kind that scares you, rather than making you jump at regularly-spaced committee-decided intervals. It’s the kind that slow burns its way to the horror — we meet the characters, see their relationships, arrive at the right location… There are hints at what might be coming, but they idle past in the background, almost unnoticed… but gradually increasing.

This isn’t time wasting; it isn’t really character development either, despite how some of it may seem (more on that in a bit). It’s how Hitchcock builds suspense — we know it’s coming, we just don’t know when — and likely contributes to some sex-related subtext too. (I haven’t just pulled that out of thin air, incidentally. There’s the odd moment where that subtext almost breaks through into the text, though Hitchcock quickly reels it back in.)

The second half is where all this time spent delaying and manoeuvring pays off. The titular demented avians attack, and attack again, a near relentless series of assaults and set pieces that allow Hitchcock to show off his apparently endless array of shooting and editing tricks. These aren’t just spectacular action sequences — though there are some, of a fashion — but sequences of unnerving horror. And it’s all achieved without a single note of music — no slowly rising throb in the background to tell us we should be getting scared, no dramatic thud to make us jump, no piercing musical shrieks as the birds attack — yet some sections are almost unbearably tense, built entirely with camera angles and masterful editing.

If there’s a weak note it’s the romantic subplot. While it initially drives the film, it’s largely abandoned later on, becoming no more than an excuse to move characters into place for the birds’ attack. In fact, Hitchcock seems to just get tired of it, allowing the film to jump abruptly from will-they-won’t-they to cuddling and kissing — and it’s not even like a first kiss. Intriguingly, a deleted scene included on the DVD (which has been lost, only surviving through a script segment and production photographs) seems to provide the ‘missing link’ in the central relationship. However, it also offered an explanation for the birds’ attacks (albeit a jokey one), something Hitchcock was keen to avoid, which likely explains its removal.

But that’s mostly beside the point. The Birds is a tension-based horror movie, and every sequence of tension is perfectly staged. This is where Hitchcock is really in his element, and all of the preamble is worth enduring just for the chance to see the master let loose. Dan Fawcett’s lack of eyes has probably stuck with me as much thanks to Hitchcock’s impeccably paced build up as to the gruesomeness of the actual image; and the birds amassing on the climbing frame outside the school is an absolutely perfect sequence, a moment of pure cinema.