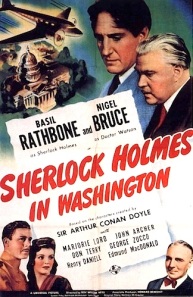 The last of three World War 2-concerned films in the Rathbone/Bruce series (the previous two being The Voice of Terror and The Secret Weapon), and once again more a spy thriller than a traditional detective tale. That’s not to say Holmes’ abilities as a detective aren’t present — in fact, he does a very reasonable amount — but if you switched him for a generic British Intelligence agent the plot would be unlikely to suffer and the dialogue probably wouldn’t need much work.

Certainly, the quality of Holmes’ detection is a bit of a mixed bag. Some scenes do demonstrate his brilliant reasoning, but others stretch credibility to the limit, for example when he manages to work out what’s been transported in a blanket. Another disappointing moment sees Holmes in awe of and “forget” about modern scientific methods, which seems rather at odds with the highly intelligent detective at the forefront of his field that we see in the original tales. It’s more than a little like the filmmakers have taken the character and methods from his 19th Century setting and dropped (rather than adapted) him into the present day. It’s these little inconsistencies that are arguably most bothersome when such a spy thriller claims to be a Holmes film.

Other deduction scenes do work, however, such as when Holmes enjoyably reasons the hiding place of the matchbook, the film’s MacGuffin. Unfortunately, this sequence suffers from a total lack of tension as we already know where it is. This leaves us watching Holmes play catch-up, and there’s no sense of a race-to-the-prize because we don’t see how the villains’ hunt is progressing. Said matchbook is put to good use in another sequence where it is unwittingly passed around at a party. This is perhaps the most simple and obvious thing to do with such a MacGuffin, but at the same time it’s an always-effective idea. On the other hand, when the matchbook ends up back where it started one has to conclude that this sequence is no more than padding.

One of the more striking elements of the film is it being Holmes’ first trip to the States (on screen in this series, at least). It’s highly praiseful of America, of course, and spends a good bit of time on a travelogue-style showcasing of sights, continuing with Watson remarking on US papers, trying out gum, and more. It makes a change of scene for the series, but also feels a bit self-congratulatory on the part of the American production team, which can be more sickening than the British patriotism of the previous two entries. While that may be national bias on my part, it seems a bit unlike Holmes too. There’s also the prerequisite patriotic closing quote, though at least this time it’s from a British character about US-UK relations. Still, intentional or not, Rathbone delivers it with an almost unwilling flatness.

Elsewhere, Watson’s bumbling comedy is occasionally unobtrusive, occasionally grating, but occasionally raises a smile. Best is the scene where Holmes has him play various characters in a reconstruction, although there’s more mileage in that than the film manages. In complete contrast to this, the film’s villains are a particularly brutal bunch, murdering for no real reason and torturing women.

This review was written over three months after seeing the film, based entirely on notes made at the time and my rather poor memory. Apologies if it is therefore a bit unfocussed or, God forbid, inaccurate in the odd minor fact.