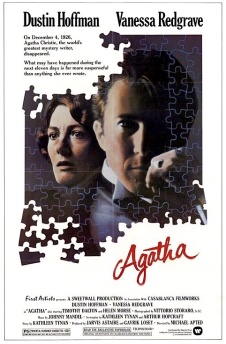 There are no giant wasps in sight as Vanessa Redgrave’s Agatha Christie goes missing for eleven days in December 1926, and Dustin Hoffman’s journalist tries to track her down. While the frame of the story is true, the reasons behind Christie’s disappearance, and what occurred during it, aren’t known — which makes it fertile ground for speculation. Sadly, a fantastical plot about jewel thieves and shapeshifting aliens is much more exciting than the down-to-earth mystery we’re offered here.

It’s easy to see the attraction of Christie’s disappearance: it’s a real-life mystery about arguably the greatest mystery author ever, with enough unusual events surrounding it to make it extra suspicious and a long enough gap for something significant to have happened. But while the idea is initially exciting, when it comes to retelling it there isn’t a great deal there — the facts of her disappearance are just the ‘before & after’, amounting to little more than an abandoned car, an assumed name and some amnesia. Unless one invents something to fill those missing days, there’s little to tell (she went to a hotel and forgot what happened, essentially) — so, of course, this film fills in the gap. With a murder mystery, naturally. Sort of, anyway.

To be honest, I found it a tad confusing for the most part. While the initial setup is well handled, showing what drives Christie to run away (consciously or not) and the beginning of the police search, it begins to flounder once the plot slides into its fully fictional phase. Hoffman’s journalist, who had been hoping to interview Christie, manages to stumble across her at the hotel, where he pretends not to know who she is, while she… has health treatments… It’s only at the conclusion, when Christie’s plan begins to come together, that one realises there was a plan at all. It’s a shame the revelation comes so late because it’s actually not that bad a plot, and makes for quite a neat and almost plausible (providing you can accept Christie as a potential murderess (sort of)) explanation for everything.

The performances do nothing to raise the film. Redgrave is lumbered with little to do, mostly wandering around looking dazed. Her performance is decent but the material she has is lacking. Hoffman, on the other hand, is just flat, while Timothy Dalton’s sneering Colonel Christie sadly barely features. On a more technical level, the police investigation subplot is disappointingly forgotten halfway through, and everything is shot with too little light. Sometimes the latter is effective, such as during a train journey where occasional flashes of light illuminate Christie’s uncomfortably blank face, but at other times it merely obscures events. (It’s possible this is just the print, of course.)

Christie’s disappearance remains a fascinating mystery, though in all likelihood the true causes were either very internal or mental health related — not the easiest thing to depict in a movie, especially when your audience is likely expecting a thriller. Agatha has a game stab at weaving an interesting tale into the gaps in the facts, but by the end I was wondering if a straightforward biopic mightn’t have been a better idea.