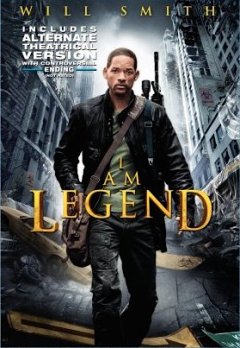 I only watched the theatrical version of I Am Legend earlier this year (it’s #35), but, for reasons I won’t elaborate on for once, I’ve found myself watching this alternate version already.

Most of the comments in my original review still apply, as this cut only has minimal differences: there are a couple of very short new scenes in the third act, which were presumably excised because they primarily feed into the different ending, the main attraction of this version. Personally, I prefer it. The whole butterfly thing is too God-messagey, recalling the weakest elements of Signs, but if one can put that aside then the new content fits in much better with several threads that develop in the rest of the film (in both versions — in the original cut they’re just ignored). It feels like this was the intended conclusion but, for whatever reason, someone decided it needed changing. Perhaps it wasn’t explosive enough; or, indeed, conclusive enough, as it dispenses with the safe-haven epilogue and its pathetic attempt at justifying the title — another pleasurable loss as far as I’m concerned.

One other element I’ve reconsidered thanks to this repeat viewing are the CGI humans. They’re good enough in and of themselves, and would make more than passable foes in another action film, but here they ruin the ambiance that’s so carefully built up before their first appearance. Yes, the CGI lions are also clearly fake, but with limited methods to create such scenes they seem more acceptable. The arrival of the Dark Seekers, on the other hand, barges the film from thoughtful sci-fi drama into horror action blockbuster stylistically, in a way that using real actors simply wouldn’t. The not-real Dark Seekers may have superhuman jumping abilities, but the film doesn’t need those either, and could easily have crafted a similarly action-packed climax with real performers.

I Am Legend is still as middle-of-the-road as before, with very little to choose between the two versions. However, thanks to a less irritating final few minutes, this version just has the edge — if you ever intend to watch I Am Legend, be it a repeat viewing or your first, I recommend you plump for the alternate cut.

The theatrical version of I Am Legend is on Watch tonight, Tuesday 14th October 2014, at 10pm.