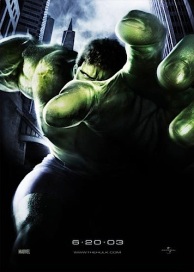 With the Edward Norton-starring (and -penned), Louis Leterrier-directed sequel/re-imagining of the Hulk coming this summer, I decided it was finally time to watch Ang Lee’s much derided 2003 attempt at bringing Marvel’s green monster-hero-thing to the big screen. Much like the lead character — in a Jekyll & Hyde-style, he’s mild-mannered scientist Bruce Banner by day, but the big green monstrous Hulk when angry — this is very much a film of two vastly different sides.

Indeed, the most striking thing about Lee’s interpretation of the Hulk is what a mish-mash of styles it is. On the one hand, it wants to be a drama/thriller, focussed on father-child issues and military cover-ups. On the other, it has comic book action sequences and a bizarre editing style inspired by comics — a compilation of unusual techniques that look like a Media Studies teacher’s wet dream. Not even Spider-Man was that kooky. In the end, it just means the cutting style feel out of place, firstly because for much of the film (at least the first 45 minutes) it’s the only reminder of the film’s comic roots, but especially because Lee’s use of the tricksy techniques is inconsistent — sometimes confusingly overused, sometimes apparently forgotten. Other technical elements also detract. Danny Elfman’s score is blandly uninspired, a carbon copy of his work on similar films. Worst of all is the CGI Hulk — it looks like they used an action figure he’s so plasticky. It gets by OK in early appearances, swathed in moody shadows, but in the glaring desert sunlight he doesn’t stand a chance.

The big, destructive sequences starring the Hulk himself are too little too late. There’s nothing wrong with sneaking drama into blockbusters, but this feels like a blockbuster snuck into a drama. There are fights because there have to be, not because anyone involved in making the film seems to want them. They’re badly placed thanks to the plot structure and the film’s pace topples under their weight. Even the climax wants to be a battle of wills between father and son, but turns into a nonsensical messy CGI splurge. That said, the dramatic moments don’t fare much better. Usually so watchable, Eric Bana can do little with the material offered here. The rest of the cast don’t suffer as much, and there are times when it almost works, but neither the dramatic nor blockbuster sides fully function in themselves, and certainly not when slammed together.

Hulk is not a film anyone could love — even the weakest comic adaptations usually have their fans — and, for a film aimed at a devoted fan base, this is perhaps its biggest flaw. Equally, it retains too much of the superhero genre for anyone to consider admiring it as a purely dramatic film. Hopefully Hulk-fan Norton’s film can marry the two halves better… or if not, at least create some cool destruction-filled action.