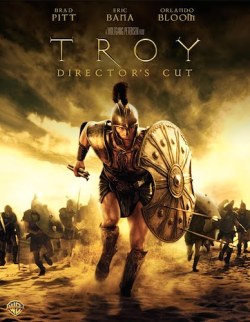 A lot of people didn’t like Wolfgang Petersen’s big budget version of The Iliad. I can’t remember the specific criticisms any more, other than that some friends who’d read the poem found this to be simply laughable. Personally, I quite enjoyed it — it may not be classic art like its source, but the theatrical cut of Troy was a more than passable example of swords-and-sandals entertainment. If not an epic, despite its running time, it was quite fun.

This director’s cut adds almost half an hour of new material, which is about a 15% increase in length — enough to justify a new number here, I feel. That said, I can’t spot most of what’s new, undoubtedly because the last time I saw Troy was in the cinema almost four years ago. Rose Byrne’s character seems to get more screen time, which in turn helps flesh out Achilles; and, based on what it says in IMDb’s trivia section, Trevor Eve’s role has also increased. He’s still a minor character, but as an advisor to King Priam the reinstating of his scenes means there’s more politics on screen. And I believe there’s some extra nudity too — quite why that couldn’t be in the R-rated theatrical cut is beyond me, but there you have it.

What this reveals is that, on the whole, Troy hasn’t changed much. If you know it well enough to spot the differences then you surely already like it, in which case I expect you’ll like this cut too. Despite the length and additions (which, in some extended cuts, can throw things out of kilter) it feels well paced, taking time to build character and plot in between the action sequences. Some of the characters have (relatively speaking) complex motives and actions — I expect we have Homer to thank for that — while several of the action scenes are fairly impressive — due more to the Hollywood production team.

If you didn’t like Troy first time round, I doubt you’ll be swayed now. Some of the script is very clunky, dragging the performances down with it, and if you didn’t like its level of faithfulness then that hasn’t improved either. Mind you, compared to the 1997 TV version of The Odyssey, which opens with a twenty minute version of this tale, Troy seems like high art.

This score is one higher than I gave the theatrical cut (not reviewed here). I’d attribute this more to generosity and lowered expectations than the added material.

I recently re-watched the theatrical version on TV by ‘accident’, and was considerably underwhelmed — though, as noted above, I rated that one lower before, so technically nothing’s changed. Anyway, a few of my thoughts from that re-watch can be read here.