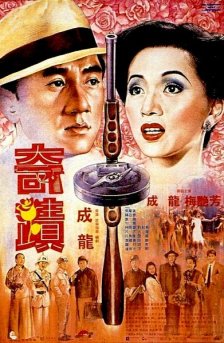 I’ve always been a bit wary of Chan’s films: he’s renowned for using comedy in his action (to help break away from the frequently-applied “new Bruce Lee” label), which isn’t really to my taste; but after we were shown an impressive clip from this in a lecture I felt I had to give it a go.

It’s 1930s Hong Kong and Chan accidentally becomes the head of a mafia-like gang. The film follows a “gang war” plot for about 40 minutes before abruptly changing tack to become an identity-based farce! It’s all a bit messy and most of the genuinely funny bits are still in Chan’s excellent action sequences, which are mind-bogglingly impressive feats of acrobatics and choreography. Of course, it’s these that we’ve come for, and the film would benefit from less pointless farcing about, a shorter running time, and more evenly distributed action sequences.