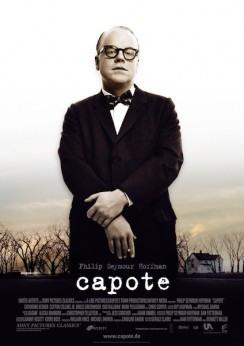 It is, unsurprisingly, Philip Seymour Hoffman’s Oscar-winning lead performance that dominates this movie. While the title might suggest a biopic, the film actually concentrates on the five year period in which Truman Capote researched and wrote his non-fiction novel In Cold Blood.

While this process forms the structure of the plot, the title gives away what the movie is actually ‘about’ — in and around the mechanics of the murder investigation and Capote’s work process, it’s the character of the man, and how it’s affected, that is really revealed to the viewer (in a subtler way than my blatant highlighting of it here would suggest).